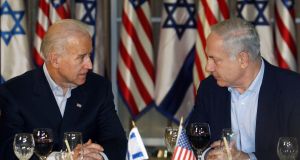 Then US vice-president Joe Biden with Israel’s prime minister Benjamin Netanyahu in 2010. Biden understands the resumption of efforts to resolve the Palestinian/Arab-Israeli conflict fosters stability even if these efforts do not achieve progress. Photograph: Getty Images

The Biden administration is to reset US relations with Palestinians and Israelis, promote negotiations between them and urge normalisation of Arab-Israeli ties to reduce regional tensions.

While retaining its steadfast support for Israel, the administration will countermand ex-president Donald Trump’s pro-Israeli initiatives which punished Palestinians.

President Joe Biden has rejected Trump’s abandonment of the “two -state solution” and recommitted the US to the establishment of a “viable” Palestinian state alongside Israel. This could revive contacts between the Palestinian Authority and Israeli government, which were suspended last year, and avert violence.

To secure this objective the Biden administration has called on Israel to halt settlement expansion and drop its plan to annex the West Bank, and on the Palestinian Authority to end paying pensions to families of Palestinians killed or imprisoned for mounting attacks on Israelis.

A long-standing friend of Israel, Biden will neither reverse Trump’s recognition of Jerusalem as Israel’s capital nor his shift of the US embassy to the holy city from Tel Aviv.

Biden will also oppose anti-Israeli resolutions and actions in international forums and organisations.

Funding for UNRWA, an agency caring for five million Palestinian refugees in the region, is essential if the Biden administration is to address the downward slide of the refugees into abject poverty. Ireland, France, Germany, Estonia and Belgium have expressed “deep concern” over UNRWA’s “critical financial situation”.

Trump ended the annual US contribution of $365 million, one-third of its budget, and cancelled the yearly $200 million for aid and development projects.

Like former president Barack Obama, Biden understands that the resumption of efforts to resolve the 73-year old Palestinian/Arab-Israeli conflict fosters stability even if these efforts do not achieve progress.

Their absence generates popular Arab resentment which sours inter-Arab relations and relations between the Arab world and the West, which is blamed by Arabs for fostering the establishment of Israel and failing to end its occupation of Palestinian territory conquered in 1967.

Arab resentment complicates normalisation between Arab rulers and Israel. Although Egypt and Jordan signed peace treaties with Israel, relations remain cold because their citizens have not accepted warm ties.

Opinion polls conducted in the Middle East and north Africa – including in countries which have recently established ties with Israel – reveal that 80 per cent of respondents reject recognising Israel until an independent Palestinian state emerges in East Jerusalem, the West Bank and Gaza.