Senators to be sworn in on Tuesday, with Democrat Pat Leahy to preside over trial

The impeachment trial of Donald Trump formally has begun, as the article of impeachment against him was delivered to the US Senate. Video: Reuters 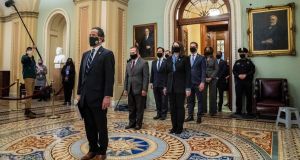 The impeachment trial of Donald Trump formally began last night, as the article of impeachment against him was delivered to the US Senate.

Shortly after 7pm, the impeachment managers – Democrats that have been chosen by House speaker Nancy Pelosi to represent the House in Mr Trump’s trial – processed across the Capitol to the Senate.

“Donald John Trump engaged in high crimes and misdemeanours by inciting violence against the Government of the United States,” he said as he outlined the charge of “incitement of insurrection” against the former US president. It marks the second time in a year that the House has delivered impeachment charges against Mr Trump to the Senate, though the trial itself will not begin in earnest until February 9th to allow both sides time to prepare.

On Tuesday, the 100 members of the Senate will be officially sworn in for the trial.

Mr Trump became the first US president in history to be impeached twice when the House of Representatives voted to impeach him on January 13th for his role in inciting the attack by his supporters on the US Capitol a week previously. However, a two-thirds majority is need to convict him in the Senate.

If convicted, senators could then vote to bar Mr Trump from running for office again.

The former president, who has been residing at his Mar-a-Lago home in Palm Beach, Florida, has retained South Carolina lawyer Karl “Butch” Bowers to defend him in the trial. Several large law firms reportedly declined to represent the former president.

Pat Leahy, a Democrat from Vermont and the longest-serving senator in the chamber, will preside over the trial in his capacity as president pro tempore of the Senate.

His appointment is another indication of the unique nature of Mr Trump’s impeachment trial as he becomes the first US president in history to face possible conviction by the Senate after he has left office.

While the US constitution states that the chief justice of the Supreme Court must preside over the trial of a president, it makes no reference to a former president.

Mr Leahy noted that previous presidents pro tempore had presided over impeachment trials of non-presidents and had “historically served as a neutral arbiter” – a recognition perhaps of the opposition he is likely to encounter from Republicans who have voiced dismay at the prospect of a Democrat overseeing the trial.

“I consider holding the office of the president pro tempore and the responsibilities that come with it to be one of the highest honours and most serious responsibilities of my career,” the senator said.

“When I preside over the impeachment trial of former president Donald Trump, I will not waver from my constitutional and sworn obligations to administer the trial with fairness, in accordance with the constitution and the laws.”

The impeachment trial is set to loom over the opening weeks of the Biden presidency, though the new president has reiterated his desire to push through his proposed $1.9 trillion Covid relief plan in Congress.

Meanwhile, Mr Biden pushed ahead with further executive orders on Monday, as he seeks to dismantle much of Mr Trump’s agenda.

Mr Biden revoked his predecessor’s ban on transgender people serving in the US military. Mr Trump introduced the ban for new recruits three years ago, overturning an Obama administration initiative to allow transgender people to openly serve in the military.

“President Biden believes that gender identity should not be a bar to military service, and that America’s strength is found in its diversity,” the White House said in a statement Mr Biden also signed an executive order effectively continuing the travel ban on passengers from Europe and Brazil that was introduced by Mr Trump last March.

Though Mr Trump signed an order in his final days instructing the restrictions to be lifted on January 26th, the Biden team immediately indicated that they would reverse the order.

Travel into the United States from the Schengen area and Britain and Ireland has been severely curtailed since March, with only American citizens, green card holders and some classes of visa-holders permitted to enter. Mr Biden has now added South Africa to the list of countries affected.

Also on Monday Mr Biden signed an executive order which will see the federal government buy more goods made in the United States, as the new president seeks to boost America’s manufacturing industry. The order requires government contracts to have a higher domestic component, while also tightening up rules around procurement.

“Today, we’re getting to work rebuilding the backbone of America: manufacturing, unions, and the middle class,” Mr Biden said in the White House. “It’s based on a simple premise: that we’ll reward work, not wealth, in this country.”

He said that federal government contracts to foreign companies went up by 30 per cent under the previous administration. “That is going to change under my watch.”

He also announced a new “Made in America” director role at the Office of Management and Budget.