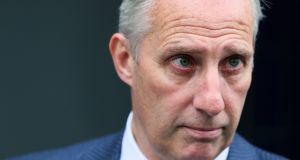 DUP North Antrim MP Ian Paisley: “Are you picking up any sense of the anger and bitterness all sides of unionism feel about this?” Photograph: Brian Lawless/PA

A British minister said he is working to ease anxiety among Northern Ireland’s business community about the end in March of a post-Brexit grace period that has blunted some of the impact of the Northern Ireland protocol.

“We are seeing signals, there are signal incidents that have happened, particularly in recent days. We are starting to see graffiti, we are picking up social media sentiment of a growing discontent, particularly within the Protestant/loyalist/unionist community. That has not manifested itself in any outworkings at this point,” said Assistant Chief Constable Mark McEwan.

He warned that the end of the three-month grace period on March 31st, after which more customs declarations will be required for goods moving from Britain to Northern Ireland, could “focus people’s minds” in some parts of the community.

He said that although the PSNI was monitoring the mood in loyalist communities, the coronavirus pandemic may be moderating people’s enthusiasm for public protest.

“Are you picking up any sense of the anger and bitterness all sides of unionism feel about this?” Mr Paisley asked. “Some sections of the community are starting to sense they are sitting on a powder keg.”

Mr McEwan said he did not wish to downplay or overplay anything.

SDLP South Belfast MP Claire Hanna said it was important that “we do not talk up trouble at a very tense and difficult time”.

Mr Paisley later drew criticism from other members of the committee when he referred to “the genocide of sectarian murder” by the “Catholic IRA”.

Placing the IRA’s campaign in the context of the Holocaust, Mr Paisley asked Mr Lewis if he would press the Irish Government to do more to secure justice for the victims.

“Today is Holocaust Memorial Day where we remember victims of Holocaust and also other genocide around the world and in Northern Ireland. Of course we remember the Border campaign and the genocide of sectarian murder where the IRA, the Catholic IRA, murdered Protestants at the Border,” he said.

“And we’ve been pushing for over a year now for the Irish Government to move beyond lip service that they would address issues to do with the unsolved 500 murders on the Border that were of British people in their jurisdiction and then dumped on our Border.”

“I appreciate how incredibly sensitive this is and I appreciate the huge problems and fear for their lives that the Paisley family have gone through but, as a practising Roman Catholic myself, I would also just like to note that I didn’t think the way that that question was phrased was conducive to trying to move things forward,” he said.