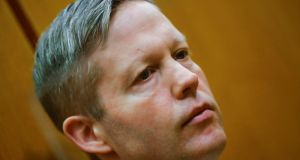 A self-described German neo-Nazi has been handed a life sentence for shooting dead a regional politician at point-blank range.

Stephan Ernst (47), from the southwestern state of Hesse, admitted shooting Walter Lübcke (66) on June 2nd 2019, the first killing of a politician in postwar Germany.

Days after his arrest he revoked his confession but reversed that decision while on trial in nearby Frankfurt, describing the killing as “cowardly, wrong and terrible”.

On Thursday Frankfurt regional court handed down a life sentence and, given then grave nature of the crime, imposed a subsequent, open-ended period of detention.

An accomplice identified as Markus H, who taught Ernst to shoot, was handed an 18-month sentence for illegal possession of firearms.

Prosecutors say he accompanied Ernst to far-right events and public meetings during the 2015-2016 refugee crisis.

It was at one such meeting in a small town near Kassel in October 2015 that they heckled Lübcke. The regional Christian Democratic Union (CDU) governor defended a new asylum home in the town and said Angela Merkel’s liberal refugee policy – which led to the taking in of more than one million people – reflected Germany’s Christian values.

“Whoever does not support these values can leave this country any time, if he doesn’t agree,” said Lübcke in an outspoken speech that spread through far-right circles and made the little-known regional leader a hate figure for neo-Nazis.

Four years later, the bill of indictment said Ernst “crept up on his victim” at night and surprised him on his terrace while he smoked.

The politician tried to stand up, they pushed him back into his chair and ordered him not to move. When the politician shouted “get lost”, Ernst said he shot him at close range with a revolver.

Lübcke’s son found his father dead in a pool of his own blood at his home in Wolfhagen-Istha in the federal state of Hesse. The first killing of a politician in postwar Germany caused outrage, and prompted tighter security for leading public figures.

Ernst was arrested after DNA evidence linked him to the crime scene but his defence lawyer urged him to revoke his confession.

In the early days of the trial, his lawyer claimed his accomplice, Markus H, had supplied the gun, got into an argument with the politician and shot him by mistake.

In his ruling, Judge Thomas Sagbiel, heading a five-judge panel, described the killing as a “perfidious murder . . . with racist and xenophobic elements based on a nationalist attitude”.

With huge public interest, and Covid-19 restrictions, he said he hoped the Lübcke family felt the trial had been fair, but acknowledged their loss was “impossible to gauge”.