Joe Biden can bring either unity or change – not both

US Politics: There is no harmonious way to the kind of society Democrats wish to build 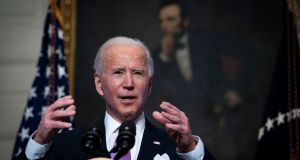 US president Joe Biden: The next four years hinge on which is the truer Biden – the bold manifesto or the emollient tone. Photograph: Doug Mills/The New York Times

For once, Joe Biden was less sentimental than his audience. The inauguration of the US president last week brought forth a media gush that had been pent-up since, well, a Democrat last held the White House. One broadcaster saw the parallel lights of the National Mall as the presidential arms “embracing America”. For others, it was the first lady’s soulful gaze at hubby that moistened the eye. The cooing over a poem has still not stopped.

There are at least two problems with such gooey enthusiasm. One is that it confirms the suspicions of conservative Americans. Their picture of the liberal elite as schemers against the people is wrong and dangerous. But the lesser charge – that its critical faculties melt into slush when Democrats govern – has been hard to rebut since grown men burbled on about “Camelot” in the John F Kennedy years.

The other problem with last week’s effusions is the raising of impossible hopes. Liberals cheered Biden’s appeal to national unity. They also celebrated his vision of progressive change. It is only necessary to name those two projects in consecutive sentences to make clear their irreconcilability.

If Biden means to be the most left-wing president since the 1960s (some commentators, weighing his policies, say the 1930s), he will alienate Republicans and split the US. If, in keeping with his career so far, national togetherness is the higher dream, then he must forfeit or dilute much of his domestic programme.

To be clear, either choice is honourable. But it is a choice. There will be no such thing as bipartisan radicalism.

For a sense of the Republicans’ implacability, consider, if you can bear it, the arcana of the Senate. Mitch McConnell, the party’s crafty leader there, wants the Democrats to commit to the preservation of the filibuster. Without assurances on this stratagem, which effectively requires non-financial bills to win a supermajority, he threatened to hold up the motion that gives full effect to the Democrats’ control of the chamber. That is, he used counter-majoritarian means (the postponement of a Democratic Senate) for counter-majoritarian ends (the filibuster).

This effrontery came after an electoral defeat, a Capitol siege in which Republicans were inadvertently complicit and an olive branch of an inaugural speech by a well-liked new president who doubles up as a personal friend of decades standing. If this is the Republican posture now, imagine it next year, when the administration is shop-soiled and what conservative shame there is about the Donald Trump era has gone. Or even next month, when the Senate is due to try the former president for incitement of insurrection.

Not only will there be no Republican help in the expansion of the state, but another Tea Party – yet coarser than the first – is on the cards. Medicare expansion and a 28 per cent corporate tax rate will be framed as Maoism: laughably but, for millions, compellingly. These and other Biden policies poll well. But if we have learnt anything in recent years, it is that a ferocious minority can roil a nation. Those who urge the new president to go hard and fast, and there are many, must know that it will negate the promise of civic peace that is otherwise his selling point.

The left’s best case against the Biden candidacy was always tactical, not ideological. It posits that a man who entered Washington in 1972 has never quite adjusted to the rise of partisanship. Such is his trust in the good faith of his opponents, that he would be easy meat for them. Such is his commitment to the oneness of America, that he would prefer a bland presidency to a provocatively active one.

His half a century in public life would appear to make them right. But the platform that he ran on and still espouses points quite the other way. The next four years hinge on which is the truer Biden – the bold manifesto or the emollient tone – and on whether he is even conscious of the tension.

“With unity we can do great things,” says the president, in a line that is no more accurate for its sweetness. Outside of war, or indeed pandemic-control, it is precisely without unity that great things are done. The New Deal was sensationally divisive, even with Franklin Roosevelt, the politician of the century, steering it. Civil rights were so controversial as to change the electoral geography of the nation.

There is no harmonious way to the kind of society that Democrats wish to build. After the Trump years, they are entitled to their mawkishness about the prospect of unity or the prospect of reform. Just not both. – Copyright The Financial Times Limited 2021

0:29 Birthday cake candles cause car to catch fire in Cork

2 Birthday cake candles cause car to catch fire in Cork

5 Poolbeg chimneys may have to be encased in fibreglass, says council