Poles protest in Warsaw, Poland as the Polish government announced that the near-total ban on abortion will go into effect this week. Video: Reuters 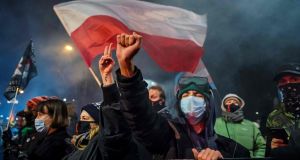 A demonstrator gestures as people take part in a pro-choice protest in Warsaw on Wednesday night. Photograph: Wojtek Radwanski/AFP via Getty Images

Thousands of Poles took to the streets on Wednesday night in protest against the introduction of new legislation effectively banning abortion.

It follows last October’s constitutional court ruling that outlawed abortions in the case of foetal abnormalities. According to the ruling, which cannot be appealed, the only remaining circumstances for a Polish woman to end a pregnancy legally in her home country are in cases of rape, incest or health risk.

Recent figures suggest this amounts to 2 per cent of total terminations carried out annually in Poland.

The October ruling triggered street protests of more than one million people, crowds denounced as “nihilists” by Jaroslaw Kaczynski, leader of the ruling national conservative Law and Justice (PiS) party.

Behind the scenes, however, official alarm at the protests saw the government hold back on publishing the ruling, making it law.

Three months on, just after 11pm on Wednesday evening, the government published the ruling in the official gazette, launching a new round of protests.

In Warsaw, thousands of women’s rights protesters marched to the PiS headquarters in defiance of pandemic rules banning gatherings. Smaller demonstrations were held in other regional cities, from Poznan to Krakow and even bigger demonstrations are planned for Thursday.

“This is not over yet,” wrote Wanda Nowicka, an opposition MP and pro-choice campaigner. On Twitter she warned the government: “You have not yet won this war against women and you are not going to win.”

Malgorzata Kidawa-Blonska, a leading opposition MP and deputy Sejm speaker, tweeted a line from a dissenting ruling by constitutional court judge Leon Kieres: “The state should provide women with the necessary help, not force them to be heroic.” She added: “PiS does the opposite.”

Former Polish prime minister Donald Tusk said it was important to defend the rights of Polish women “against the cynical fanaticism of power”.

The battle over abortion dates back to 1993 when the relatively liberal communist-era abortion regime was replaced, after energetic lobbying by Poland’s powerful Catholic Church.

One of Europe’s most restrictive regimes followed and, in 2019, 1,110 legal abortions were carried out in Poland. Polish women’s groups estimate that each year at least 130,000 Polish women have abortions illegally either at home or abroad.

The 1993 law has remained a bone of contention for anti-abortion and pro-choice camps, with regular political and legal flare-ups. Catholic bishops continued to lobby successive governments to remove the right for abortions in the case of severe foetal abnormalities. Their close alliance with the ruling PiS, including pulpit endorsements on election day, paid off in October with the ruling of the constitutional court.

Its president Julia Przylebska, a close ally of Mr Kaczynski, said abortions in cases of foetal abnormality legalised “eugenic practices with regard to an unborn child, thus denying it the respect and protection of human dignity”.

As Poland’s constitution guarantees a right to life, she said, terminating a pregnancy based on the health of the foetus amounted to a “forbidden form of discrimination”.

Political observers see the abortion ruling as the latest stage in a cultural war that has polarised Polish society in recent years.

Since taking office in 2015 PiS has pushed a radical reform agenda to, it says, rid Polish society of remnants of the old communist regime, or problematic post-communist structures and elites.

Mr Kacyznski has woven the abortion battle into this narrative, telling his voters, predominantly rural traditional and conservative Catholics, that pro-choice campaigners are mounting an “attack aimed at destroying Poland, leading to the triumph of forces which . . . [would] end the history of the Polish nation”.

Critics accuse Mr Kaczynski and his government of weaponising Polish patriotism to undermine the separation of powers, politicise courts with illegal appointments and turn public broadcaster TVP into a government propaganda outlet.

For years the European Commission has battled Warsaw over its reforms and, hours before the abortion ruling was published, Brussels announced it was moving to the next stage of its procedures against Poland for undermining the rule of law in breach of the European treaty.

News of Poland’s new abortion regime comes amid heated debate over a 45-year-old Polish man living in the UK who suffered a heart attack last November. After doctors said his brain was deprived of oxygen for 45 minutes and irreparably damaged, his wife agreed to turn off life support.

The man’s mother protested, saying her son was a practising Catholic and would have wished otherwise. She was offered support by the Polish foreign minister to fly her comatose son home.

In December the European Court of Human Rights dismissed her appeal against a UK court decision allowing the man to be taken off life support. After weeks of high-level political and diplomatic intervention from Warsaw, the man died on Tuesday.

Constitutional court president Krystina Pawlowicz, the leading voice in the abortion ruling, weighed into the UK coma row. She likened British doctors to Nazi war criminal Josef Mengele, suggesting their decision to switch off life support was to allow them harvest his organs.

She tweeted: “There should be consequences for the drastic, ostentatious DISREGARD of Poland by Great Britain in such an important matter.”