Indian police use facial recognition in search for farmer protesters 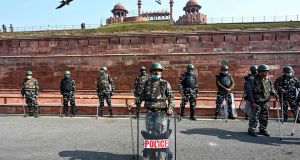 Indian police are using facial recognition technology to identify suspects in a crackdown on farmers who overran parts of New Delhi this week, while leaders of the months-long protest movement struggled to contain rifts within their ranks.

Thousands of farmers on tractors rode into the capital on Tuesday as demonstrations against prime minister Narendra Modi’s contentious agricultural reforms boiled over, overwhelming authorities.

Many protesters broke away from agreed routes to march towards the centre of the city, including entering the Red Fort, ending in clashes with police.

The aftermath prompted infighting between the various farm organisations that banded together for the protests, many of whose members have camped on New Delhi’s outskirts since November. Two groups called off their participation.

The chaos at the heart of the capital rattled authorities and protest leaders alike. It threatened to further embitter the stand-off between Mr Modi’s government and farmers demonstrating around the country.

The majority of India’s workforce still depends on agriculture, making farmers among the most influential groups in the country and a vital political base.

Police have detained nearly 70 people and registered 25 criminal cases, according to Mr Shrivastava. Local media put the number of detentions at 200, and said several protest leaders had been named in complaints.

Delhi police’s use of facial recognition in particular has previously proved controversial. Authorities used the technology in 2019 amid protests against a citizenship law that critics said discriminated against India’s Muslim minority.

Police have taken up facial recognition technology as a law-enforcement tool despite the absence of a national law to define limits on its use, alarming privacy advocates.

Farm leaders, however, distanced themselves from the brawl, arguing that their movement had been hijacked by outsiders.

The three agricultural laws against which farmers are protesting seek to modernise the sector by opening it up to greater private participation. Many economists argue that such reforms are long overdue but the laws provoked outrage when they were passed in September.

Protesting farmers have called the measures an attempt to weaken fatally the state protections on which they depend, such as guaranteed prices for certain crops.

For weeks Mr Modi’s ruling Bharatiya Janata party sought to negotiate with farmers without success. But opposition parties have alleged the BJP has not taken the farmers’ concerns seriously and helped to stir the violence on Tuesday.

Randeep Surjewala, a spokesperson from the Congress party, called it “a concerted conspiracy, aided and abetted by the Modi government”.

Jaswinder Singh, a rice and wheat farmer who took part in the protests, said he was saddened by the violence. He pointed to a bus with smashed-out windows, a damaged police van and a tractor with slashed tyres at a protest site in central Delhi.

“A few people were doing that, but not all over,” he said. “I feel guilty. It’s our public property.”– Copyright The Financial Times Limited 2021