If the vaccines row wasn’t real, Boris Johnson would have to invent it

Europe Letter: The pandemic will not end without international co-operation 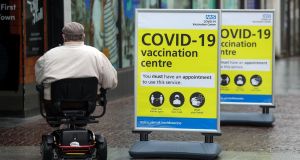 An EU demand for vaccines made in factories in Britain fits perfectly into the jingoistic and conflict-focused strain of British reporting on the EU. Photographer: Chris Ratcliffe/Bloomberg

If a mischievous god wanted to do so deliberately, it would be difficult to engineer a conflict between the European Union and the United Kingdom more embittering than the rivalry over whose citizens should first receive a life-saving vaccination in the midst of a raging pandemic.

The tale is tangled, and obscured by the fact that the contracts signed by pharmaceutical companies are being kept confidential to protect competition.

But AstraZeneca was the EU’s first great hope. It was the first pharmaceutical company with which the bloc signed a contract, back in August, for up to 400 million doses. BioNTech-Pfizer and Moderna surprised the bloc by overtaking AstraZeneca: their vaccines were both granted approval by the European Medicines Agency (EMA) before AstraZeneca even applied on January 12th.

By that stage, many governments had already built their vaccine strategies around the assumption that the British-Swedish company’s vaccines would arrive first. AstraZeneca’s vaccine was more attractive than the others: it was based on a more familiar technology, cheaper, and easier to distribute, as it can be stored in fridges rather than requiring a deep-freeze supply chain.

The supply problems spell deep trouble for those countries – mostly Europe’s more struggling economies – that opted to rely heavily on AstraZeneca. Even more so if the vaccine does not receive approval for those aged over 65 when the EMA decides whether to authorise it on Friday. (A relatively small number of people over 65 took part in the trials of the vaccine, and the EMA has not ruled out that the vaccine could be approved only for younger groups.)

The EU has reacted angrily to a surprise update from the company on Friday that it would deliver the EU only a quarter of the vaccines initially agreed by the end of March. Tensions were stoked further when AstraZeneca chief executive Pascal Soriot claimed EU and UK supply chains for the vaccine are separate, and explained the delay was due to EU dependence on just two factories, one with a production problem. The EU insists its contract named four plants – two of which are located in the UK – and that the EU’s supply should come from these as well.

This row arose in an already febrile atmosphere, in which some political actors in Britain are keen to represent its vaccination head start as a benefit of Brexit, and are glad for opportunities for more antagonism with the EU of the kind that fuelled Johnson’s rise to power.

Already this week, a proposal by the European Commission to require pharmaceutical companies to provide data when vaccines leave the bloc resulted in British front pages claiming the EU was threatening to block the UK’s vaccine supply.

An EU demand for vaccines made in factories in Britain is a tabloid dream, or nightmare, come true. It fits so perfectly into the jingoistic and conflict-focused strain of British reporting on the EU that if it wasn’t true, Johnson would have had to invent it.

Yet here’s a fact that fits awkwardly into that narrative: according to Britain’s vaccine taskforce, its initial supply of AstraZeneca doses were made in the EU, in plants in Germany and the Netherlands.

Like last year’s fight for PPE, the row reveals how toxic competition for scarce resources can be and how quickly it can escalate. And how if all sides act in their own pure self-interest, all are left worse off. If Britain blocked AstraZeneca exports to the EU, the EU could block Pfizer exports to the UK.

Some read in the affair a justification for the EU’s strategy of jointly procuring vaccines, because it’s just a taster of the vicious fight that would have ensued if 27 member states were all competing against each other, with Germany inevitably coming out on top.

But there’s a far larger story than a fight among the world’s richest populations over who gets a vaccine first. The EU has put €500 million towards buying vaccines for poorer countries, but because supply has all been block-booked for the rich nations, that doesn’t translate into doses. As of last week, 39 million doses had been given in richer countries, according to the World Health Organisation. In one low-income country, just 25.*

The WHO has warned that unless doses are equally distributed internationally, new variants may continue to emerge that will make the whole effort fruitless.

“It’s in every nation’s own medium- and long-term interest to support vaccine equity,” WHO director general Tedros Adhanom Ghebreyesus wrote this week. “Until we end the pandemic everywhere, we won’t end it anywhere.”