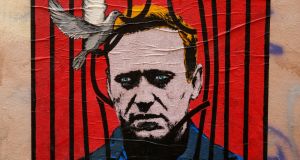 “If Russia had an open political system, then Navalny would probably not be alone. But because it does not, there seems to be no one else crazy enough to trade real life for politics,” Zygar writes.

“Why does Navalny continue to believe that his time will come and that one day he could succeed Putin as president? There’s only one rational explanation – he’s an alien.”

Zygar wrote that in 2016, when Navalny was routinely followed, harassed, threatened and thrown in prison for short spells for leading protests against Putin and what he calls his “party of crooks and thieves”.

If Navalny’s resolve seemed extraordinary then, what to make of it now, as he sits once more inside one of Moscow’s most notorious jails, having defied warnings not to return to the country where he was almost murdered last August?

Navalny (44) was arrested on January 17th upon arrival in Moscow from Germany, where he recovered from a nerve agent attack in Siberia that he is certain was carried out by state security on Putin’s orders.

Typically, he has not gone quietly back behind bars. Two days after his arrest, his anti-corruption fund released an eye-popping report detailing Putin’s alleged secret ownership of a €1 billion palace on the Black Sea. Despite the Kremlin’s denials, the video has already been viewed more than 98 million times on YouTube.

Navalny then urged Russians to take to the streets last Saturday, “not for me but for yourselves, for your future”, and tens of thousands of people in more than 100 towns and cities answered his call. His team says protests will resume across the country this Sunday, “for Navalny’s freedom. For freedom for all. For justice”.

A decade ago, Navalny was making a name for himself and making trouble for Russia’s elite by investigating murky practices in major companies and government procurement, and as an informal leader of protests against vote rigging in the 2011 parliamentary elections.

But while his ambition was already clear – he made no secret of wanting to be president – his political philosophy was harder to pin down.

After growing up in the town of Obninsk, south of Moscow, Navalny studied law and then joined the liberal Yabloko party. It expelled him in 2007 for his “nationalist activities”, however, and he took part in an annual far-right gathering in Moscow called the “Russian March”.

Navalny began calling himself a “national democrat” and, while continuing to denounce graft and misrule, he also railed against mostly Muslim migrants from the Caucasus and Central Asia in terms that played on the suspicion among many ethnic Russians that they were getting a raw deal in their homeland.

Some see cynicism, others pragmatism, in his bid to unite liberal and nationalist opponents of Putin, and it is echoed in his current “smart voting” campaign that encourages people to back whichever politician has the best chance of beating the ruling party’s candidate in local and parliamentary elections.

He has dropped the inflammatory rhetoric as his international profile and domestic standing have grown, but still insists he was right to address sensitive issues that bother millions of Russians, even if they discomfit big-city liberals.

Yet many people in neighbouring states – while longing to see the back of Putin – would still be wary of a president Navalny: in 2008 he wrote in support of Russia’s war in Georgia and used an ethnic slur to describe its people; and, while acknowledging that Putin illegally annexed Crimea in 2014, he also urged Ukrainians to accept that the peninsula would now stay under his country’s control.

Even Russian activists and journalists who admire Navalny say he can be arrogant and rude. But as well as revealing the depth of his determination, his emergence from the ordeal of recent months has also softened his image.

For that, and much else, he has his wife Yulia to thank.

She led the campaign to move him to Germany from a Siberian hospital where doctors denied he had even been poisoned and, when he woke from a coma, he wrote a long post “about love” on Instagram: “Yulia, you saved me,” Navalny concluded, “and let them put that in the neuroscience textbooks.”

She was with him throughout his recuperation and on the flight back to Moscow, and kissed him farewell when he was arrested at passport control.

Leaving the airport without him, as a crowd chanted “Yulia, Yulia!” she said: “Alexei is not afraid. I’m not afraid either, and I call on you all not to be afraid.”

The social-media savvy Navalny, lover of computer games, internet memes and US sci-fi sitcom Rick and Morty, appeals to younger Russians in a way Putin (68) never could. Navalny’s home life, with a wife of 20 years and two children, appears to be an open book.

Facing him is a former KGB officer who has never appeared in public with his own two daughters, and shrouds his private life and true wealth in secrecy; during the pandemic Putin has come to seem more isolated than ever, and Navalny now mocks him as “the old man in the bunker”.

For many Russians, it is not Navalny – the politics-obsessed “alien” with the unshakeable ambition – but the increasingly remote Putin who seems to live on a different planet.