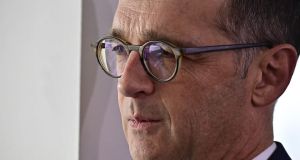 German Foreign Minister Heiko Maas: “You cannot drag out Brexit for a decade.”

Germany’s foreign minister has warned London that there will be no Brexit extension beyond October, sending out the strongest signal yet that Berlin’s patience with the UK’s deadlocked political system is starting to wear out.

“They will have to decide what they want by October,” Heiko Maas said in an interview. “You cannot drag out Brexit for a decade.”

Angela Merkel, German chancellor, fought hard to secure a six-month Brexit delay at last week’s European summit against French insistence that the UK should be given at most until the end of June to secure an orderly withdrawal from the EU. Mr Maas’s intervention suggests that Berlin will side with the harder French line should the new Brexit deadline of October 31st draw closer without progress on the UK side.

He also cautioned British leaders that an appeal for a further Brexit delay would be read as a plea to remain in the EU: “Another extension could send the signal that they plan to stay in the EU after all.”

The foreign minister stressed that he had not given up hope that the UK parliament would back Theresa May’s draft withdrawal agreement before the European elections next month, pointing to the apparent absurdity of Britain’s predicament. “Just think about it: You say you want to leave Europe and then you hold a European Parliament election,” he said.

His Brexit remarks came during an interview in which Mr Maas launched a vigorous defence of German foreign policy against recent criticism from allies, highlighted German concerns about the political rift with the US, and warned countries such as Italy not to be “bought out” as part of Chinese attempts to split the EU.

Mr Maas said he was “very critical” of Italy’s decision to endorse China’s Belt and Road Initiative, describing it as “further evidence that China might have a strategy that seeks to divide the EU”. The minister added: “We are living through a new age of great power competition between the US, Russia and China. If we want to stand our ground we have to confront this as Europeans. If some of us allow themselves to be bought out then the EU will become a mere object of world politics. That cannot be our goal.”

He acknowledged that Germany itself had been criticised by allies, most notably with regard to Berlin’s failure to meet Nato defence spending targets. “We have outlined a path that takes us to 2024, when we will spend 1.5 per cent of GDP on defence. That means an increase in defence spending of 40 per cent. Both from a financial and a political point of view that is for the German public an ambitious project.”

Critics point out that Germany’s 1.5 per cent target would still fall short of Nato’s 2 per cent of gross domestic product spending goal, and that Berlin’s medium-term plans suggest even a 2024 defence budget of 1.5 per cent might be out of reach. But Mr Maas, whose centre-left Social Democratic party is viewed as the main obstacle to higher defence spending, sought to allay those concerns. “I know there is irritation on this issue - but we will implement this, and we will deliver.”

He also rebuffed criticism of Germany’s recent moves to block European defence exports to Saudi Arabia, which has angered Britain and France. “Our policy on Saudi Arabia is I think the correct one,” he said. “You cannot sit in the UN Security Council and call on the conflict parties involved in Yemen to stop the war - and then walk out the door and go about as if nothing happened.”

Mr Maas acknowledged the deterioration in relations between Germany and the US under Donald Trump, but dismissed speculation about a complete rupture. “I think on the whole we can still rely on one another. But there have been changes in American foreign policy that mean we now have to take on more responsibility ourselves. That’s one area where we really notice the new ‘America First’ approach.”

One important area of disagreement between the US and Europe remained the Iranian nuclear deal, and in particular Washington’s threat to impose sanctions on European companies that trade with Islamic Republic. To circumvent those sanctions, Germany, France and Britain recently launched Instex, a special purpose vehicle to help European businesses settle payments with their Iranian partners.

He was also confident that the Iranian nuclear deal would hold despite US efforts to undermine the agreement.

“The Iran nuclear agreement has been pronounced dead so many times it should have broken down a long time ago. But I think Iran has an interest - also in relation to the US - to keep this agreement alive. It gives Iran access to Europe. I think this deal has a future.”