Macron: Notre Dame Cathedral will be renovated within five years 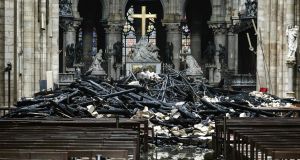 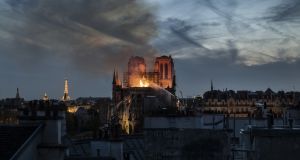 Flames and smoke are seen billowing from the roof at Notre-Dame on April 15th, 2019 in Paris, France. Photograph: Veronique de Viguerie/Getty Images 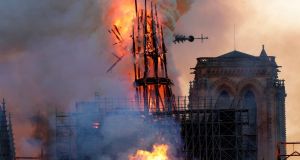 The steeple collapses as smoke and flames engulf the Notre Dame Cathedral in Paris. Photograph: Getty 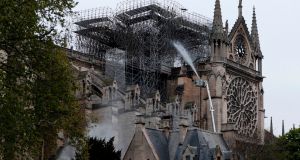 ‘Under control’: Firefighters work to extinguish a fire at Notre-Dame Cathedral in Paris early on Tuesday. Photograph: Zakaria Abdelkafi/AFP/Getty Images 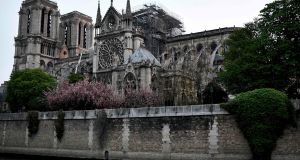 French president Emmanuel Macron has given an address on television on the burning of Notre Dame Cathedral in Paris, claiming the edifice will be renovated within five years.

Meanwhile, hundreds of millions of euro have been pledged to rebuild Notre Dame Cathedral after it was ravaged by fire.

Nearly 400 firefighters tackled the blaze, battling to stop it completely destroying the treasured facade after flames torched the roof, sending its spire crashing to the ground.

Mr Macron vowed to rebuild the historic building, and more than €600 million has so far been pledged.

French luxury and cosmetics group L’Oreal and its owners, the Bettencourt Meyers family, have pledged €200 million. The family’s Bettencourt Schueller Foundation will contribute to the donation.

The Pinault family has meanwhile pledged €100 million to help restore the 800-year-old cathedral. Francois-Henri Pinault was quoted in the French media as saying he and his father Francois had decided to donate the money to help with a “complete reconstruction”.

The younger Mr Pinault is chief executive of international luxury group Kering, which owns brands such as Gucci and Yves Saint Laurent, and is the president of French holding company Groupe Artemis, which owns Christie’s auction house.

He told BBC Radio 4’s Today programme it was a “shock” to see the building on fire and added: “We need to rebuild collectively, this part of our history, of our culture, so it’s an urgent, urgent need to move forward, so I decided to unlock a very important amount of money to do that.”

Paris mayor Anne Hidalgo said the capital would provide €50 million towards the effort. The surrounding Ile-de-France region promised a €10 million emergency fund. And the national heritage foundation opened a “national collection” on the internet to receive tax exempt donations from the public.

Other donations reported include €1 million from technology consulting firm Capgemini, and €20 million from the holding company of the JCDecaux family, owners of one of the world’s largest outdoor advertising companies.

Apple chief executive Tim Cook said on Twitter that the technology giant will donate, but did not say how much.

He added: “We are heartbroken for the French people and those around the world for whom Notre Dame is a symbol of hope. Relieved that everyone is safe.

The United Nations has said it will support the French government in rebuilding Notre Dame Cathedral through its Paris-based cultural agency Unesco “in whatever way they feel is most necessary”.

UN spokesman Stephane Dujarric said the cathedral is a Unesco world heritage site “so I know our colleagues there will do whatever they can”.

He said secretary-general Antonio Gutteres, who tweeted on Monday that he was “horrified” at the blaze at the landmark cathedral, “will fully support Unesco’s efforts”.

Meanwhile, French insurance firm Axa said on Tuesday it had provided insurance coverage for two of the contracting firms that were working on the Notre Dame restoration prior to the blaze.

The fire swiftly ripped through the cathedral’s oak roof supports, where workers had been carrying out extensive renovations to the spire’s timber-framed supports. Police have begun questioning the workers involved, the prosecutor’s office has said.

In a statement released on Tuesday, Axa said its staff were fully collaborating with the investigators.

Attention turned on Tuesday to assessing the devastation wrought to the cathedral. The blaze was brought under control at about 3.30am. Just before 10am, a spokesman for the fire department pronounced the fire completely extinguished.

Several photographers were allowed to enter the cathedral overnight with firefighters. The haunting images they took showed a large, golden crucifix hanging intact above an unscathed altar. A shaft of light from the clerestory pierced the transept diagonally. Debris smouldered on the sanctuary floor. The burning red embers of “the forest”, as the intricate 13th century timber roof frame was known, could be seen through gaps in the cathedral’s vaulted ceiling. It was at the same time an image of heaven and hell.

The cathedral’s “treasures”, including the crown of thorns which Christ is said to have worn on the cross and the tunic of Saint Louis, the crusader king, were spirited away to safety. One report said they were taken to the Paris town hall, across the river on the right bank.

Yet there was great concern for the centuries-old organ, which was soaked by fire hoses, and for the cathedral’s stained glass windows, “a foretaste of the light of heaven”, as Le Figaro called them. Much of the lead holding the glass in place melted in the fire, and the windows are to be dismantled before reconstruction starts.

“The main structure has been saved,” culture minister Franck Riester said on France Inter radio. “But there is a great deal of instability. The situation is still precarious. Two-thirds of the roof went up in smoke. The spire collapsed into the interior, creating a hole in the vaulted ceiling. The intersection of the transept collapsed, as well as a large part of the north transept.”

Stéphane Bern, the journalist who was appointed by president Emmanuel Macron to defend France’s architectural heritage, predicted it would take 40 to 50 years to reconstruct the cathedral. Architects and builders will work from copies of the original plans.

“Teams of firemen and architects on site are worried,” Mr Riester continued, “because above the vault, there is a lot of water, and carbonised wood soaked with water, which is very heavy. All that is very fragile and it was built with such finesse that when one part collapses it threatens the entire structure.”

Firemen gave priority to saving the cathedral’s bell-towers. “They did it with great courage . . . at the risk of their lives,” said deputy interior minister Laurent Nunez. If firemen had not gone into the inferno, the cathedral “probably would have collapsed,” he added.

Two policemen and one fireman were slightly wounded in the fire. “After more than nine hours of intense combat, close to 400 Paris firemen triumphed over the terrible fire,” the fire department tweeted. It is rare for such a huge fire to claim no fatalities.

The Paris tribunal asked the judiciary police to open a preliminary investigation for “accidental destruction by fire.” It was not clear why officials said they believed the fire was accidental. Investigators have not yet been able to inspect the scene of the fire, because the structure is too fragile. But police spent part of the night identifying all persons who were working on the cathedral’s renovation. Some were questioned overnight.

The fire broke out in the roof at the centre of the cathedral, where scaffolding had been in place since last July. The €150 million renovation project was nearly completed.

While the fire raged, 200 parishioners held a Mass at Sacré Coeur Basilica in Montmartre to pray for the cathedral’s survival. From the hilltop, they could watch Notre Dame burning.

Sister Agathe, a young, Polish-born nun from the monastic fraternity of Jerusalem, watched the fire from a bridge behind the cathedral. “It makes me think of our Church which is going through scandals today,” she told Le Monde’s reporter Allan Kaval.

“There is the time of the apocalypse,” she said, gesturing towards the burning cathedral. “And there will be a time of rebirth. Like Notre Dame, what must be purified will be purified, but the essential part, the walls, are standing, awaiting reconstruction.”

Reactions to the disaster poured in from around the world. The US president Donald Trump urged France to dump water on the burning cathedral from tanker aircraft. French civil security responded politely, in English, that the weight of the water would endanger the fragile structure. The former first lady Michelle Obama, who was in Paris to promote her book, said the majesty of Notre Dame had taken her breath away.

“What grief to see these awful images of Notre Dame in flames,” said German chancellor Angela Merkel’s spokesman. “Notre Dame is a symbol of France and of our European culture. All our thoughts go to our French friends. We are at their side.”

In moving expressions of solidarity with the people of Paris, MEPs and European Commission and European Council leaders on Tuesday pledged to make the rebuilding of Notre Dame a European project.

Speaking at the European Parliament in Strasbourg, commission president Jean Claude Juncker said that Paris is “not a neutral place” in the hearts of Europeans “but a place where we return again and again to fall in love with the city . . . Europe is wounded, Paris is wounded, we are all wounded.”

President of the European Council Donald Tusk spoke of the rebuilding of the Polish city of Gdansk after the second World War, while German conservative MEP Hans Olaf Henkel recalled the contribution of the people of Coventry to the post-war reconstruction of Dresden’s cathedral. “It must be a common project,” he said.

Mr Tusk said that “France could do it alone . . . but we are bound together by something more than treaties.” Notre Dame represents part of a common cultural inheritance, he said.

Some turned to history and culture in an attempt to fathom the catastrophe. Guillaume Gallienne, a famous actor with the Comédie française, read a chilling excerpt from Victor Hugo’s Notre Dame de Paris, in which the great writer imagined the cathedral in flames, on France Inter radio.

“All eyes were raised to the top of the church,” Gallienne read. “What they saw was extraordinary. At the peak of the highest gallery, above the central rose window, a great flame rose between the two bell towers with swirls of sparks, a great, chaotic and furious flame, a shred of which the wind carried away into smoke . . .”

In the course of her 850-year history, the cathedral had known wars and looting, Étienne de Montety wrote in the front-page editorial of Le Figaro. Yet “never before had it undergone an outrage on this scale . . . something of the beauty, the grandeur, the soul of France has gone up in flames, and the news is infinitely sad.” – Additional reporting: Press Association/Reuters

Beirut explosion: 78 people dead, nearly 4,000 injured 06:37
‘This was like a nuclear bomb’: More than 2,700 injured in Beirut explosion 00:04
Deluge of appeals expected after predicted grades handed out in Scotland 22:48
Europe braces for Covid-19 wave as Spain records 8,500 new cases over weekend 20:07
Whereabouts of Spain’s ex-king Juan Carlos shrouded in mystery 19:33