US House of Representatives speaker in London ahead of Ireland trip 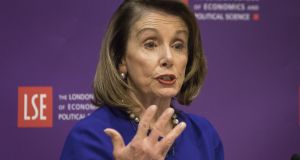 US House of Representatives speaker Nancy Pelosi said there would be “no chance whatsoever” of a US-UK trade deal if the Northern Ireland peace agreement was weakened by Brexit.

Speaking at the London School of Economics ahead of her visit to Dublin, the Democratic leader in the House said that a US-UK trade agreement would be “a non-starter” if the Belfast Agreement was undermined.

Ms Pelosi, who as speaker is second in the line of succession to the US presidency after the vice president, is the most senior American politician to warn against a trade deal between the two countries if the Northern Irish peace process is damaged by Brexit.

The Democrat was speaking in London as part of a US congressional delegation visit to Britain, Germany, Ireland and Northern Ireland. The delegation travels on to Dublin today when she will meet Taoiseach Leo Varadkar and Tánaiste and Minister for Foreign Affairs Simon Coveney.

In conversation at the London university, Ms Pelosi stressed in the first instance that getting a trade bill through the US congress was “no given” but said that “if there was to be any weakening of the Good Friday accords that there would be no chance whatsoever – a non-starter – for the US-UK trade agreement.”

Praising the 21-year-old peace deal, the Democrat said that it was not something that could be undermined given how highly the agreement was held by people around the world.

“The Good Friday accords ended, like, 700 years of conflict,” she said.

“It is not just about that geography though. This is not a treaty only. It is an ideal; it is a value. It is something that is a model to the world, something we all take pride in.”

She mentioned how proud former US president Bill Clinton and former senator George Mitchell, who brokered the peace agreement, were of the agreement and how it had to be protected post-Brexit.

“It was hard but it was a model and other people have used it as a model and we don’t want that model to be something that can be bargained away in some other agreement,” she said, referring to Brexit.

Ms Pelosi said that she told British prime minister Theresa May, her de facto deputy David Lidington, Conservative pro-Brexit hardliners and Labour leader Jeremy Corbyn during their meetings and conversations while in London that there would be no trade deal if Brexit undermined the 1998 agreement.

“To all of them, we made it clear: don’t even think about that,” she said.

In response, “every single person” told the US politicians: “don’t worry about it – that is a place that we cannot go,” said Ms Pelosi.

Among the politicians in the travelling delegation are Democratic congressmen Richie Neal, the chairman of the powerful House of Representatives Ways and Means Committee that must sign off on any future US trade deal with the UK, and Brendan Boyle, whose father emigrated from Co Donegal to Pennsylvania.

Mr Neal has played a longstanding and active role in the US in building support for peace in Northern Ireland. Ms Pelosi referred to his role in the peace process “for a long period of time”.