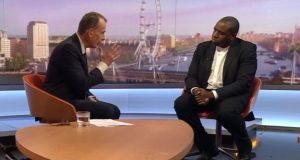 Labour MP David Lammy has said comparing the hard Brexit European Research Group of Tory MPs with Nazis and proponents of South African apartheid was “not strong enough”, and suggested that the Brexit debate has allowed proponents of hard right views to flourish.

The Labour MP, who is a vocal campaigner for a second European Union referendum, was asked on the BBC’s Andrew Marr Show whether a comparison he previously made to the election of Adolf Hitler’s party in Germany and to South African white supremacists was appropriate.

“I would say that that wasn’t strong enough. In 1938 there were allies who hatched a plan for Hitler to annex part of Czechoslovakia and Churchill said no. And he stood alone,” he said.

Asked if it was fair to make such a comment about elected politicians, he replied: “I don’t care how elected they were: so was the far right in Germany.”

I feel sorry for Mr Lammy, comparing a Parliamentary ginger group with an organisation and creed that killed six million Jewish people makes him look foolish and his comments unbalanced. It damages his reputation.https://t.co/BIxjvQK1Ol

“We must not appease. Let me just be clear, I’m an ethnic minority. We have, in the ERG, in Jacob Rees-Mogg, someone who is happy to put on to his web pages the horrible, racist AfD party, a party that’s Islamophobic and on the far right,” he said. “I’m sorry, but . . . we should not appease that.”

Mr Rees-Mogg has defended his decision to tweet a video of a speech by a senior member of the AfD, saying he did not endorse the party’s views but that the opinions expressed had “real importance”.

Mr Rees-Mogg wrote in the original tweet: “The AfD leader asks: ‘Is it any wonder the British see bad faith behind every manoeuvre from Brussels?’ ”

Mr Lammy said broadcasters including the BBC were allowing “this extreme hard-right fascism to flourish”.

He said he was deeply concerned about the future of the country if Brexiteers such as Mr Rees-Mogg and Mr Johnson took control of the Conservative party. “What kind of country are we going to be like if these people are running it?” he asked.

When questioned if he was saying that Mr Rees-Mogg and Mr Johnson were the modern-day equivalent of Nazis, Mr Lammy responded: “Ask Boris Johnson why he’s hanging out with Steve Bannon.” – Guardian

1 Passenger who promised driver a ‘few quid’ after crash awarded €10,000
2 Miriam Lord: Minister for Agriculture tries to get himself out of the manure
3 Coronavirus: One more death and 24 new cases reported in the Republic
4 Driver whose car ‘rolled nine metres’ into front of other vehicle loses rear-ending claim
5 Skeletal remains discovered in south Dublin were of man missing since 2011
Real news has value SUBSCRIBE