US Wrap: Wikileaks founder expelled from Ecuadorian embassy facing extradition to US 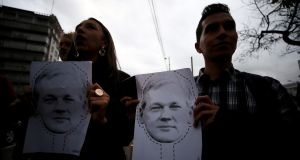 Ecuadorians demonstrate in Quito against the expulsion of Wikileaks founder Julian Assange from the Ecuadorian embassy in London after almost seven years. Photograph: Jose Jacome/EPA

Senior Democrats have said that Julian Assange should be held accountable for WikiLeaks’ hacking of Democratic emails during the 2016 presidential election, amid expectations that the Australian national will be extradited to the United States.

Mr Assange was arrested by British police on Thursday after Ecuador withdrew its asylum protection for the WikiLeaks founder, who had been living in the country’s embassy in London for almost seven years.

The 47-year-old was immediately found guilty at Westminster magistrates’ court of jumping bail on a 2010 extradition order to Sweden. The US also issued an extradition request and an indictment, accusing Mr Assange of conspiring with former US army intelligence analyst Chelsea Manning – then known as Bradley Manning – to leak classified information in 2010.

But the US indictment does not cover WikiLeaks’ involvement with the hacking of the Democratic National Convention (DNC) server and the email account of Hillary Clinton’s campaign manager John Podesta during the 2016 election campaign.

Speaking at an event in New York on Thursday night, Mrs Clinton, who has previously said that the leaks had played a role in her election defeat to Donald Trump, said that Mr Assange needed to “answer for what he has done”.

“I think it is clear from the indictment that came out it’s not about punishing journalism, it is about assisting the hacking of a military computer to steal information from the United States government, and look, I’ll wait and see what happens with the charges and how it proceeds, but he skipped bail in the UK,” she said.

“The bottom line is he has to answer for what he has done, at least as it’s been charged,” the former secretary of state told the audience.

In an apparent dig at the US president, she added: “I do think it’s a little ironic that he may be the only foreigner that this administration would welcome to the United States.”

Mr Trump said on Thursday that he knew “nothing” about WikiLeaks. “It’s not my thing,” he replied when asked by reporters about Mr Assange’s arrest, adding that it would be handled by attorney general William Barr. But during the election campaign he said several times that he “loved” the organisation, which leaked damaging information about the Clinton campaign in the months running up to election day.

Since Mr Trump’s election, the US Department of Justice has vowed to aggressively pursue Mr Assange over his organisation’s hacking of sensitive intelligence information in 2010. Within hours of his arrest in London on Thursday, US authorities published an indictment which was filed last March, just before an eight-year deadline passed since the 2010 disclosures.

The indictment accuses Mr Assange of conspiring to help Ms Manning change a password so she could log in to a department of defence computer anonymously.

Though special counsel Robert Mueller is believed to have examined WikiLeaks’ role in the leaking of private Democratic Party information in the run-up to the 2016 election, no one was indicted in connection to the hacks. However, a full version of the report has yet to be seen by Congress and could contain information related to WikiLeaks.

WikiLeaks published thousands of stolen emails from the DNC server in the months leading up to the 2016 election.