Curbs on UK role in EU sought as May set to visit Germany, France 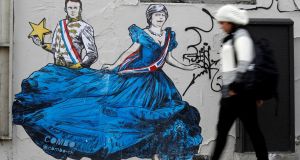 Theresa May will visit Berlin and Paris on Tuesday to make the case for a short delay to Brexit to Angela Merkel and Emmanuel Macron ahead of Wednesday evening’s emergency European Council meeting in Brussels. The talks come as EU leaders are seeking undertakings from Britain that it will not exercise all its decision-making rights as a member state during an extension.

Talks between government officials and Labour Party representatives continued on Monday night as the two sides seek to agree a common approach to Brexit.

“We are committed to finding a way through in order to ensure we can leave the EU and deliver on the referendum. That will require the parties to work at pace in order to address outstanding issues – and so ministers and their shadow counterparts will be holding talks tomorrow,” a Downing Street spokesman said.

The Conservative Party wrote to potential candidates for the European Parliament on Monday, telling them the party would contest the elections on May 23rd. The prime minister has told the EU her government will make the necessary preparations for the elections but said she hopes to ratify the withdrawal agreement in time to avoid taking part in them.

Mrs May has requested an extension of the article 50 negotiating period until June 30th but some EU leaders favour a longer extension, perhaps to the end of this year, with Britain allowed to leave earlier if it ratifies the withdrawal agreement.

Following a phone call with Mrs May on Monday, Dutch prime minister Mark Rutte said it would be crucial for the other EU leaders to know how Britain will ratify the withdrawal agreement.

“A positive decision hinges also on assurances from the UK on sincere co-operation,” he said.

The prime minister has promised that Britain will act as a “constructive and responsible” member state “in accordance with the duty of sincere co-operation” during an extension. But EU leaders will seek specific undertakings to ensure that a new British prime minister cannot obstruct EU business while continuing to negotiate Brexit.

As long as Britain remains in the EU, it will enjoy all the rights of a full member state under the treaties, so any restrictions would be voluntary. Among the conditions under consideration among the other 27 member states is a British commitment not to participate in discussions or decisions on the EU budget, on appointments to senior positions in the European institutions and on the future of the EU.

Some member states want to limit Britain’s influence on trade negotiations between the EU and other countries and one government suggested that London should not appoint a commissioner if it is still a member state when the next European Commission is formed later this year.

Mrs May met two groups of cabinet ministers and senior figures from the backbench 1922 committee on Monday amid reports she is preparing to drop her opposition to Labour’s demand for a customs union with the EU. Labour leader Jeremy Corbyn said that although his party’s negotiations with the government were detailed, the prime minister had not moved from any of her red lines.

“The key issues that we must see real movement on to secure an agreement are a customs union with the EU, alignment with the single market and full dynamic alignment of workers’ rights, environmental protections and consumer standards,” he said.