Kashmir’s special status under threat ahead of Indian election 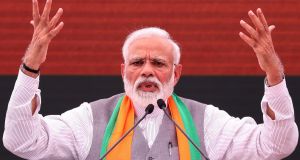 India’s ruling Hindu nationalist Bharatiya Janata Party (BJP) has pledged to scrap a decades-old statute that confers special rights on the people of the northern, insurgency-ridden Jammu and Kashmir state if it is voted back into power.

“Nationalism is our inspiration,” prime minister Narendra Modi said on Monday as he released the BJP’s manifesto in New Delhi, three days before the first of seven rounds of voting for the country’s parliamentary elections begins.

The special constitutional provisions that the BJP promises to abrogate give autonomous status to Jammu and Kashmir, which is India’s only Muslim-majority state.

The edict bars outsiders from acquiring property in the state, which is claimed in its entirety by both India and Pakistan since the two countries won independence from Britain in 1947.

The neighbours have fought three of their four wars since independence over Kashmir and the issue of the disputed region’s special status as granted by India is hugely complex and highly emotive.

The BJP has long advocated ending the distinct status, arguing that it hindered the state’s integration with the rest of India.

Opposition parties, however, accuse the BJP of targeting Kashmir because of its Muslim population. Top Kashmiri leaders also warned against repealing the special status, claiming it would trigger widespread unrest and violence.

While issuing its manifesto – Determined India, Empowered India – the BJP also promised, if elected, to build a temple to honour the Hindu god Lord Ram in the holy town of Ayodhya, 690km southeast of Delhi.

Ayodhya has been at the heart of BJP politics after Hindu zealots in 1992 tore down a 16th-century mosque built by a Mughal king, claiming it marked Ram’s exact birthplace.

Within hours of the mosque’s demolition, sectarian rioting broke out across India, particularly in Mumbai, in which more than 2,000 people died. Most of them were Muslims.

But the dispute over the land at Ayodhya, which is riddled with mythological, ecumenical and archaeological complexities, is at an impasse and is currently being adjudicated by the Indian supreme court.

The BJP also promised a raft of welfare schemes to the millions of Indian farmers and agricultural workers who comprise the bulk of the country’s 900 million voters.

It also promised a €1.28 trillion investment in infrastructure across India by 2024 to help create jobs, to counter growing voter discontent over unemployment, which has prompted countrywide protests.

The manifesto also undertook to make India’s the world’s third-largest economy by 2030, simplify the controversial Goods and Services Tax, introduced in July 2017, and strengthen national security, with the onus on “zero tolerance against terror”.

This latter assurance follows India’s recent spike in military tension with Pakistan, during which both air forces were locked in competing raids on each other’s territory.

The manifesto also includes welfare measures for permanent housing for the poor and piped water and toilets for all households.

The seventh and last round of voting for 543 Lok Sabha (elected lower house) seats takes place on May 19th, with results being announced four days later.

Polls indicate that the BJP is ahead, but could struggle to achieve the 282 seats it secured in 2014, when it won India’s first single-party parliamentary majority after 30 years of federal coalitions.