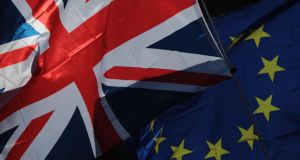 The onus is on Britain to come up with a solution to avoiding border controls with the Republic as it “created the mess” that is Brexit, a prominent German MEP has said.

Manfred Weber, chairman of the European People’s Party (EPP) group in the parliament, said: “Our message is that Ireland is not alone. Ireland is part of the family of the 27 EU member states and the interests of Ireland are our concern too.

“We want to avoid any kind of hard Border between Ireland and Northern Ireland; it is one of the top priorities.”

Speaking ahead of a meeting of EPP members in Co Wicklow this week, he said “the idea is to avoid a border”.

“Theresa May talks about a soft border” but he said it wasn’t clear what this meant.

“You have a border or you have no border. There is not a soft border in between that’s why we have to talk to each other.”

Among the scheduled speakers at the meeting of the EPP, to which Fine Gael is aligned, are the European Commission’s chief negotiator on Brexit, Michel Barnier; Taoiseach Enda Kenny; and former British prime minister Tony Blair.

“For the moment the problem is that the discussion is very heated. In Great Britain we have the election going on; that leads to situation where emotions are going up,” Mr Weber told RTÉ’s Morning Ireland.

“More radical voices are more visible than others and that’s why we have to wait for the outcome of the election. Hopefully stable government in London and then we can talk about the content again.

“Ireland has a strong say in this. That’s what we want to underline.

“We want to have a fair partnership with the UK, want it to be a win-win situation for both sides, that’s what I hear from Theresa May, but Brexit will create damage. That’s a reality.

“Leaving the European Union means to have not the advantages of this union any more. The Brits cannot have both: that is the main message.”