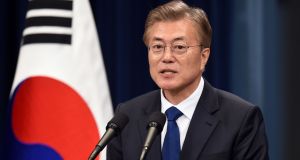 South Korea’s new president Moon Jae-in has pledged to do everything in his power to bring peace to the region and, in his first act as commander-in-chief, called the country’s top general for a briefing on the nuclear crisis.

A former commando and human rights lawyer, Mr Moon of the Democratic Party secured 41 per cent of the vote in Tuesday’s election, according to the National Election Committee. Although not quite a landslide, it is a strong mandate for the liberal’s conciliatory approach to North Korea and his pledge to rejuvenate the economy.

His election comes amid heightened tensions over North Korea’s nuclear programme. The country is believed to be preparing a sixth nuclear test.

In his inaugural address, Mr Moon pledged to end the Korean nuclear crisis by establishing a northeast Asia peace regime.

“I will solve the security crisis promptly. I will go anywhere for the peace of the Korean Peninsula. If necessary, I will fly straight to Washington. I will go to Beijing and Tokyo and under the right circumstances go to Pyongyang as well,” he said.

The White House was quick to send a message of congratulation to Mr Moon. His conciliatory attitude to North Korea runs counter to the more robust approach favoured by US president Donald Trump, who favours increasing pressure on North Korea with tougher sanctions.

There were reports from Oslo that North Korean officials began informal talks with a group of American experts, amid speculation that Washington may seek dialogue with Pyongyang.

Mr Moon’s election to the presidential residence, the Blue House, ends months of turmoil in South Korea following the impeachment and detention of conservative former president Park Geun-hye over an influence peddling and corruption scandal. Conservatives have been in power in South Korea for the past decade.

“I sense a heavy responsibility endowed by the people. My heart is full of passion for building a country that we have never had,” he said in his speech.

Mr Moon will need to build coalitions and alliances with the other political parties to get legislation through the single-chamber, 299-seat National Assembly.

He has promised a more open style of government, with direct press briefings on major issues, and also efforts to meet and greet the citizens in the markets and squares.

He was due to meet with the leaders of all five parliamentary parties, starting with the conservative party, Liberal Korea Party, which is now the main opposition party. Later he will attend a scaled-down inauguration ceremony at the National Assembly.

“The conflict between conservatives and liberals should end. I will talk directly with you. Opposition parties are my companions in the administration of state affairs. I will regularly talk and frequently meet with them,” he said.

He has appointed Lee Nak-yon, governor of South Jeolla province, as the new prime minister and Im Jong-seok, his top secretary during his election campaign, as his first chief of staff.