No indication of radiation exposure in US nuclear tunnel collapse 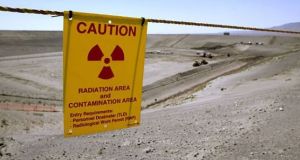 The incident occurred at a facility known as PUREX, located in the middle of the sprawling Hanford nuclear site, an official said. File photograph: Getty Images

A tunnel partly collapsed on Tuesday at a plutonium-handling facility at the Hanford Nuclear Reservation in Washington state, but there was no indication workers or the public were exposed to radiation, federal officials said.

Workers evacuated or took cover and turned off ventilation systems after damage was discovered in the wall of a transport tunnel about 170 miles (270km) east of Seattle, officials with the Department of Energy’s Hanford Joint Information Center said.

The damage was more serious than initially reported, and the take-cover order was expanded to cover the entire facility after response crews found a 400 sq ft section of the decommissioned rail tunnel had collapsed, centre spokesman Destry Henderson said in a video posted on Facebook.

“The roof had caved in, about a 20 ft section of that tunnel, which is about a hundred feet long,” he said.

“This is purely precautionary. No employees were hurt and there is no indication of a spread of radiological contamination,” Mr Henderson said of the shelter order.

Tom Carpenter, the executive director with watchdog organisation Hanford Challenge, who has spoken with workers at the site since the incident, called the tunnel collapse worrisome and said the evacuation was the correct call.

“There is a big hole there and radiation could be beaming out,” he said.

“It’s not clear to me that they know whether particulate radiation has escaped,” Mr Carpenter added. “If there is a cloud of radioactive particulates, then that can have an impact on worker health and the community. It does not take a lot for those particulates to end up in someone’s lung.”

The site is in southeastern Washington on the Columbia River. Operated by the federal government, it was established in the 1940s and manufactured plutonium that was used in the first nuclear bomb as well as other nuclear weapons. It is now being dismantled and cleaned up by the Energy Department.

Mostly decommissioned, Hanford has been a subject of controversy and conflict between state and local authorities, including a lawsuit over worker safety and ongoing clean-up delays. Mr Carpenter called it the most contaminated US site.