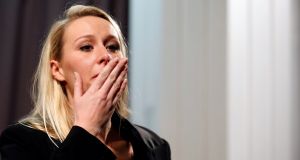 Marion Maréchal-Le Pen, rising star of the extreme right-wing Front National, has announced she is leaving politics to spend time with her daughter and to gain experience in business. Photograph: Jean-Paul Pelissier/Reuters

Marion Maréchal-Le Pen, the rising star of the extreme right-wing Front National (FN), has struck a blow at her aunt, Marine Le Pen, by withdrawing from politics three days after Le Pen was defeated in the French presidential election, and in the run-up to the June 11th and 18th legislative elections.

Maréchal-Le Pen announced in a two-page letter published by Vaucluse Matin newspaper on Wednesday that she will not stand for re-election to the National Assembly, where she is one of two outgoing FN deputies. She will also relinquish her position as a councillor for the Provence-Alpes-Côte d’Azur (Paca) region and leave the FN politburo.

Marine Le Pen reacted on Twitter, saying, “As a political leader, I profoundly regret Marion’s decision, but alas, as a mama, I understand.”

Maréchal-Le Pen, who recently divorced, said she wants to spend more time with her 2½- year-old daughter Olympe. Now aged 27, she gave the FN a younger aura in a country that has just elected its youngest ever president, 39-year-old Emmanuel Macron.

Maréchal-Le Pen’s departure is like the latest instalment in a reality television show that could be titled The Le Pen Family Saga.

The patriarch, Jean-Marie, installed his wife and three daughters in the Château de Montretout, west of Paris, in 1976. His wife Pierrette ran away with another man, posed nude in Playboy and broke off contact for 15 years.

Marion is the fruit of a brief affair between Yann Le Pen – Jean-Marie and Pierrette’s youngest daughter – and Roger Auque, a journalist who was held hostage in Lebanon. She was raised at Montretout. “I can’t count the number of times I changed her nappies,” Marine Le Pen is quoted in the book The Hell of Montretout. “She’s like my daughter!”

Marine Le Pen holds much of northeastern France. Maréchal-Le Pen was the FN’s anchor in the southeast, where Le Figaro predicts a possible “haemorrhage” in next month’s elections.

Maréchal Le Pen also constituted the FN’s link to conservatives in the more mainstream Les Républicains, who share her Catholicism and traditional family values. She says she was profoundly influenced by her three years as a student at the Saint Pius X school near Montretout.

Maréchal-Le Pen’s physical beauty belies a character of steel. “When one is a Le Pen, one is confronted with hostility and aggressiveness very young,” she told Vanity Fair. “At public school, they wrote graffiti on my bag and locked me in the toilet. At home, we received death threats, bloodied handkerchiefs in the letterbox . . .”

In the midst of the presidential campaign, Maréchal-Le Pen told Paris Première television that she wanted to leave politics. “The important thing is to do it at the right time, because I don’t want to hurt my party. In know that any step I take will be analysed and immediately seen as a war against Marine. I will do it in my own time.”

Jean-Marie Le Pen reacted to his granddaughter’s departure in Le Figaro. “If there is not an extremely serious reason for this decision, I consider it desertion,” he said. “That in the midst of a legislative battle, one of the most loved and admired stars of the movement gives up, can have terrible consequences. I hope she took the full measure of it. In mid-political battle, I find this decision regrettable.”

Maréchal-Le Pen’s colleague Gilbert Collard, the other FN-affiliated deputy in the National Assembly, said Jean-Marie Le Pen, who fought in the Algerian war, “ought to hang up his paratrooper’s beret or his soldier’s helmet. We’re not at war. This is not a desertion”.

Marine Le Pen expelled Jean-Marie Pen from the party two years ago. He made no secret of his preference for Marion, whom he saw as faithful to FN tradition. Grandfather and granddaughter railed against the power of Florian Philippot, an FN vice-president who came from the left and who exercises great influence over Marine Le Pen.

Jean-Marie Le Pen refers to Philippot and his acolytes as a “gay lobby” within the FN. Maréchal-Le Pen clashed with Philippot when she suggested that the state should not reimburse abortions.

Maréchal-Le Pen also dislikes the gudards who handle much of the logistics for the FN. Marine Le Pen’s friends from Assas law school, they founded the Gud, a militia-like group with neo-fascist overtones.

Maréchal-Le Pen says she would like to gain experience in the private sector. But, she told Vaucluse Matin, “I have not given up politics for good. I love my country, body and soul, and I could never remain indifferent to the suffering of my compatriots.”