US president accused of ‘Nixonian’ coverup over dismissal of FBI director 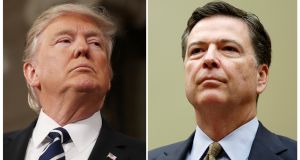 White House press secretary Sean Spicer was uncharacteristically reticent when asked on Tuesday if US president Donald Trump still had confidence in FBI director James Comey. “I don’t want to start speaking on behalf of the president without speaking to him first,” Spicer said, quickly moving on.

Three hours later the White House issued a statement announcing that Comey had been dismissed by Trump on the “clear recommendations” by attorney general Jeff Session and deputy attorney general Rod Rosenstein over Comey’s handling of the investigation into Hillary Clinton’s use of her email server.

The announcement stunned Washington. It also appeared to surprise Comey himself, who reportedly learned of it from TV reports as he prepared to address an event in Los Angeles. He quickly cancelled that and flew straight to Washington.

Trump’s decision to fire the head of the FBI is not unprecedented – Bill Clinton dismissed FBI chief William Sessions in 1993 after he refused to step down over ethical issues. Richard Nixon also famously ordered his attorney general and deputy attorney general to fire the Watergate special prosecutor Archibald Cox on the famous “Saturday Night Massacre” of October 1973.

But Trump’s decision to fire his acting attorney general Sally Yates and the FBI chief James Comey barely three months into the job has raised questions about the motivation behind the decision.

While the letter from Rosenstein specifically cited the Clinton email server scandal, this explanation has been dismissed by Democrats who point to Comey’s role at the helm of a FBI investigation into the Trump campaign team’s links with Russia during last year’s presidential election. They have effectively accused Trump of orchestrating a cover-up, describing his actions as “Nixonian”.

“This is part of a deeply troubling pattern from the administration” Senate minority leader Chuck Schumer said. “They fired Sally Yates, they fired Preet Bharara and now they’ve fired James Comey, the very man leading the investigation. This does not seem to be a coincidence.”

Some Republicans, too, have questioned Trump’s decision.

“While the president has the legal authority to remove the director of the FBI, I am disappointed in the president’s decision to remove James Comey from office,” Republican senator John McCain said.

Senate Intelligence Committee chairman Richard Burr, also a Republican, said he was “troubled by the timing and reasoning of director Comey’s termination.”

That is was attorney general Jeff Sessions, who himself had to step aside from investigations into Russian interference into US elections because he failed to disclose details of his meetings with the Russian ambassador to the United States, advised Trump to dismiss Comey only intensified speculation over why Trump took such a move.

Trump’s planned meeting with Russian foreign minister Sergei Lavrov on Wednesday in Washington is also likely to unsettle those already uncomfortable about the alleged connections between the Trump administration and Moscow.

It has also emerged that two people connected with former national security advisor Mike Flynn have been subpoenaed by the Grand Jury in connection with the FBI investigation into links with Russia.

Nonetheless, despite major questions over the Trump’s links with Russia, Comey’s actions over the last 12 months have been criticised by many, not least Hillary Clinton who said his announcement that he was reopening an investigation into the email server scandal in the closing weeks of the presidential campaign contributed to her defeat in Novemeber.

Hours before he was dismissed on Tuesday, reports had emerged that Comey had given inaccurate testimony to a senate committee last week about Clinton’s use of her email server. While he claimed that Clinton aide Huma Abedin had forwarded “hundreds and thousands of emails” to her husband, disgraced former congressman Anthony Wiener, officials claimed that she had sent emails only occasionally. The FBI is expected to correct the record.

It remains unclear if Comey will testify privately to Congress on Thursday as planned as part of the ongoing investigations into Russian interference in the election.

Focus is likely to turn to whether the White House will appoint a special prosecutor to oversee the investigation into alleged Russian interference into the US election, as demanded by Democrats and some Republicans.

Regardless, James Comey is unlikely to go away. He will probably be summoned before the various congressional committees into Russian involvement in the US election.

Myriad questions about Trump’s associates’ links with Russia remain unanswered . The dismissal of Comey appears to be only the latest stage in a story that has many chapters yet to run.