The opaque world of MEPs’ expenses is cause for concern

Europe Letter: A monthly €4,416 allowance has been heavily criticised by journalists 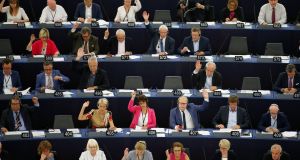 “There is,” as the independent MEP Marian Harkin observed with some serious diplomatic understatement, “ample opportunity to misspend.”

We were discussing the monthly €4,416 “general expenditure allowance” paid to all MEPs to fund their constituency offices, paid in many cases directly to their personal accounts – not in Harkin’s or Carthy’s cases – and for which no accounting or receipts are required.

This week the Court of Justice of the European Union backed the parliament’s authorities in rejecting long-standing journalists’ claims to see accounts and receipts for that and other allowances. The breach of MEPs’ privacy, the court found, was not sufficiently warranted by the demands of public accountability.

As Michael D Higgins has found as president, maintaining an office, buying stationery, phone bills and other related expenses are not cheap, and any taxpayer funds advanced for the purpose will eventually attract some demands for scrutiny from vigilant public representatives such as the Public Accounts Committee.

And so too for MEPs whose credibility, Carthy points out, in demanding accountability on EU spending may be undermined by their own practices.

MEPs are amply recompensed. They are paid €8,611.31 a month in gross salary, plus pension. On leaving the parliament they receive a golden parachute, a transition allowance worth up to €206,664, depending on length of service.

The court case centred on expenses, including the general expenditure allowance, which alone costs the public purse €40 million a year. MEPs are also refunded first-class travel expenses (vouched) and get a €313 daily signing-in allowance for hotel and living costs when working in Brussels and Strasbourg – that can be worth well over €40,000 a year and does not have to be accounted for.

Their yearly individual budget of up to €24,164 for office staff is paid to the staff and accounted for separately.

But the general expenditure allowance is another matter. A 2015 investigation by the journalists who eventually took the case found, among other things, that many MEPs were using the money to pay their national parties for rent, improperly subsidising those parties, that many did not have offices, and that few returned any unspent balance.

According to parliament, between 2010 and 2015, only five to 20 MEPs per year out of the 750 members reimbursed the institution for unspent general expenditure allowance.

Suggestions by parliament officials that a requirement to document all purchases “down to paper clips” would overwhelm its staff resources are treated with derision.

Transparency International’s Brussels office said it was “hugely disappointing” that the ruling allows the European Parliament to “keep details of MEP expenses secret and hidden from journalists, civil society and citizens”.

“I am shocked really,” said Anuska Delic, the Slovenian investigative journalist who helped launch the expenses probe. “We will appeal. It is not over.” She added that the court’s decision suggests MEPs are in “a class of their own, a class of public officials that are not open to public scrutiny”.

Delic said the documents they had requested were not the personal data of the MEPs, only papers relating to their activities as public representatives – an issue that “was completely overlooked by the court”. No one wants to know how much individual members spend on shoes or fancy clothes.

Harkin accepted that it could be difficult to receipt every expense and said she was not by any means claiming all she was entitled to. But she supports greater accountability and suggests that the general expenditure allowance spending should be randomly audited, say once every five years.

Carthy says the left-wing GUE group, to which the four Irish Sinn Féin MEPs belong, strongly supports transparency and that all expenses should be published. The four’s expenses are monitored internally by the party.

A spokeswoman for the EPP, the parliament’s centre-right bloc to which the four Fine Gael members are affiliated, refused to answer questions on the court decision. “The EPP Group would refer you to the parliament’s spokesperson service for comment on this, as it is a matter for the parliament which administers the [general expenditure allowance].” Mairéad McGuinness is a member of the parliament’s ruling bureau.

1 Mary Lou has to call for the smelling salts as SF councillor deals a knock-out blow
2 Murdered and mutilated: Keane Mulready-Woods and the teenagers of gangland
3 Who was murdered teenager Keane Mulready-Woods?
4 Dublin gangland figures involved in Drogheda feud that killed 17-year-old
5 Teenage boys and organised crime gangs: A complicated dynamic
Real news has value SUBSCRIBE