Brexit could be reversed in second referendum, Labour conference told 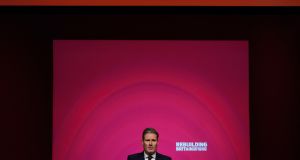 Shadow secretary of state for Brexit Keir Starmer addresses delegates at the Labour Party conference in Liverpool. ‘Nobody is ruling out remain.’ Photograph: Leon Neal/Getty Images

Britain’s Labour party has voted to keep open the option of a second referendum on Brexit, which could lead to a reversal of the 2016 vote to leave the European Union. Shadow Brexit secretary Keir Starmer received an extended standing ovation when he told the party’s annual conference in Liverpool that a second referendum would include an option to remain.

Sir Keir said Labour was “increasingly likely” to vote against any Brexit deal prime minister Theresa May brings back from Brussels and that the party would seek to trigger a general election.

What are we supposed to do – keep quiet and say nothing and leave it to the incompetence of this government?

Sir Keir’s speech followed days of confusion about Labour’s position on a second referendum after shadow chancellor John McDonnell and others close to Jeremy Corbyn suggested that remaining in the EU would not be on the ballot paper. But Mr Corbyn on Tuesday night confirmed that he shared Sir Keir’s interpretation of the motion approved by conference.

The Labour leader said that if parliament rejected the prime minister’s deal, she would have to go back to Brussels and try to negotiate a better one. He denied that Labour was pushing Britain closer to leaving the EU without a deal by threatening to vote against whatever Ms May agrees.

“What we’re making more likely is that we will force a deal that protects jobs and living standards on both sides of the Channel,” he told the BBC.

“What are we supposed to do – keep quiet and say nothing and leave it to the incompetence of this government?”

Conservative Brexiteers in the European Research Group (ERG) warned on Tuesday that they too will vote against the prime minister’s Brexit deal if it is based on her Chequers proposal. Mark Francois said the group could not vote for such a plan because they did not believe it represented Brexit.

“We would like the prime minister to change tack and to move towards a more Canada-style free trade agreement; we think that has many, many advantages for the UK,” he said.

“But if they try to put Chequers through the House of Commons then I and my colleagues will vote against it. In those circumstances the prime minister would then want to renegotiate along the lines of a free trade agreement, but far better that she pivots to that free trade agreement now before trying to take Chequers to the House of Commons and losing.”

Arriving in New York at the start of a two-day visit to the United Nations general assembly, Ms May defended her Chequers plan, which was dismissed last week as unworkable by European Council president Donald Tusk. She said she would prefer to leave the EU with no deal than to sign up to a Canada-style free trade deal that would invoke a backstop that would draw a border in the Irish Sea.

“What we’ve put on the table is a good deal. It’s a deal that retains the unity of the United Kingdom, our constitutional integrity. It’s a deal which provides for no hard border between Northern Ireland and Ireland, protects jobs and enables us to have a good trade relationship with Europe and good trade relationships with the rest of the world.”