Investigative journalists, including Gavin Sheridan, had sought access to the data 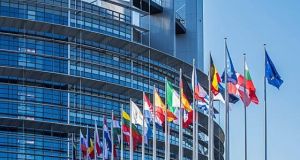 Court of Justice of the European Union said the documents were protected by the EU institutions’ freedom of information regime. Photograph: Getty

A request by reporters for access to the details about MEPs’ expenses has been denied by the EU’s court.

The court on Tuesday endorsed a previous refusal by the European Parliament on the grounds that it had legitimately protected the privacy of the MEPs and that the documents were therefore protected by the EU institutions’ freedom of information regime.

The court ruled the mere fact that the requested personal data are closely linked to public data on MEPs does not mean that the data cannot be characterised as personal data.

The Luxembourg-based Court of Justice of the European Union (ECJEU) was ruling on freedom of information document requests to the European Parliament by a group of 28 investigative journalists known as the “MEPs Project”.

Among them is Irish online journalist and blogger Gavin Sheridan.

The refusal by parliament in September 2015 to hand over the documents was appealed to the ECJEU.

The documents relate primarily to unvouched expenses for MEPs worth €4,416 a month to each of them, the General Expenditure Allowance (GEA), which is notionally intended for rent for offices in their constituencies and stationary - at a total cost to taxpayers of €40 million a year.

The payments are given to MEPs as a lump sum in addition to their regular pre-tax monthly salary of €8,611, of a budget of up to €24,164 for office staff, and a daily subsistence allowance for personal expenses during sessions of €307 per day, the latter, tax-free.

Unlike other payments, MEPs do not have to retain any records on the GEA or tell their constituents what the cash is spent on.

An investigation by the journalists in 2015 found, among other things, that many MEPs were using the money that was paid directly to their personal accounts to pay their national parties for rent, improperly subsidising those parties, that many did not have offices, and that few returned any unspent balance.

According to the parliament, between 2010 and 2015 as few as five to 20 MEPs per year out of the 750 members reimbursed the institution.

The group reported “it appears the parliamentarians themselves have a rather varied understanding of how the GEA may be used.

“Many of them claimed to use the whole sum every month on office equipment, internet subscriptions and other work-related costs. Some also included travel expenses for visitors, charity donations and payments to their national party as a ‘general expenditure’.”

In July the parliament’s governing body voted down proposals to introduce some accountability by requiring MEPs to keep their GEA receipts, have these checked by an external auditor, or even publish this information.

The CJEU found the journalists had failed to show how the transfer of personal data at issue is necessary to ensure an adequate review of the expenditure incurred by MEPs to fulfil their mandate.

The court considered the disclosure of an edited version of the documents requested expunged of all personal data (including the names of the MEPs) would have deprived them of any useful effect.