Trump accuses China of trying to interfere in midterm elections 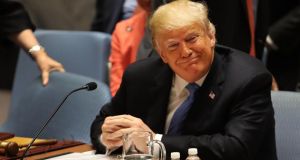 US president Donald Trump has accused China of trying to meddle in November’s midterm elections.

Chairing his first meeting of the UN Security Council in New York, Mr Trump said that China does not want “me or us to win because I am the first president to ever challenge China on trade”.

“We don’t want them to interfere in our upcoming election,” he said.

Mr Trump did not mention Russia during his opening address to the powerful 15-member body.

His comments come as the Trump administration steps up trade pressure on Beijing. Last week the US announced tariffs on $200 billion of imports from China.

Later on Twitter, Mr Trump posted cuttings from an Iowa paper, the Des Moines Register, which he said China had placed and “made to look like news”.

“China is actually placing propaganda ads in the Des Moines Register and other papers, made to look like news,” he tweeted. “That’s because we are beating them on Trade, opening markets, and the farmers will make a fortune when this is over!”

Iowa is one of the agriculture-heavy states that has been impacted by retaliatory sanctions introduced by China and other buyers of US exports.

China is actually placing propaganda ads in the Des Moines Register and other papers, made to look like news. That’s because we are beating them on Trade, opening markets, and the farmers will make a fortune when this is over! pic.twitter.com/ppdvTX7oz1

Vice-president Mike Pence is also expected to make a speech next week on the issue of Chinese interference.

During his speech to the security council, Mr Trump also called on other members “to work with the United States to ensure that the Iranian regime changes its behaviour and never acquires a nuclear bomb . . . A regime with this track record must never be allowed to possess a nuclear weapon.”

Defending the decision by the United States to withdraw from the 2015 Iran nuclear agreement, Mr Trump described it as a “horrible, one-sided deal” that “allowed Iran to continue its path towards a bomb”.

“Iran needed cash and we gave it to them,” he said of the deal negotiated by the Obama administration and other international powers.

He also praised North Korean leader Kim Jong-un as a man who he has “got to know and like”. He said that details of a second meeting between the two leaders would be announced soon.

Speaking directly after Mr Trump, French president Emmanuel Macron took issue with the US stance on Iran and North Korea as he highlighted the divisions that have emerged between members of the UN body in recent years.

“North Korea continues to be a threat,” he said. “We expect specific actions showing that they genuinely determine to dismantle their nuclear and ballistic programme in a way that is verifiable.”

Given the state’s failure to denuclearise, he said that the international community’s dialogue with the rogue state “has to be accompanied by rigorous implementation of sanctions on North Korea”.

On Iran, he noted that the other signatories to the Joint Comprehensive Plan of Action (JCPOA) – the official name of the agreement – remain committed to the deal, and Tehran was continuing to abide by its conditions.

He said that while the pathways of the signatories of the agreement had diverged since 2015, “all of us here maintain the same objectives” when it comes to Iran, including “strict international control of the peaceful use of their nuclear programme”.

Mr Trump ramped up criticism of Iran in his address to the UN General Assembly on Tuesday, denouncing the Iranian regime as the world’s “leading sponsor of terrorism”.

“We cannot allow the world’s leading sponsor of terrorism to possess the world’s most dangerous weapons,” he said, claiming that, in the years since the deal was reached, Iran’s military budget has grown by nearly 40 per cent, the country has developed nuclear capable missiles, and it has increased its funding of terrorism.

National security adviser John Bolton warned in a speech on Tuesday that there would be “hell to pay” if Iran crosses the United States.

“Let my message today be clear: We are watching, and we will come after you,” he said, accusing Iran of sowing “death and destruction”.