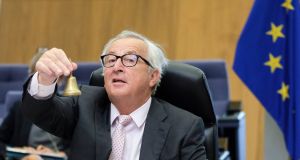 It’s a bit like a big children’s game of political musical chairs, played over a year in multiple dimensions, according to unstated but almost self-contradictory sharing rules.

The carve-up of key European jobs has begun as incumbent terms run out. One, and only one, for you, one for me, a few women, political balance, large-state/small-state balance . . .

In 2019, new presidents need to be found for the union’s four largest institutions: the European Commission; the leaders’ European Council; the European Central Bank, setting monetary policy; and the European Parliament.

Then there’s the EU’s foreign policy chief and a string of smaller jobs that can be doled out as compensation or sweetener. Complicating matters for EU leaders who will take these decisions is the Spitzenkandidat system, supposed to add democratic legitimacy to the commission presidency by embroiling it in the elections for MEPs next May.

Europe’s political parties nominate their candidates, and, supposedly, the EU leaders endorse the one whose party has headed the field.

But though the Spitzenkandidat system produced Jean-Claude Juncker last time, the leaders don’t like what they see as a usurpation of their prerogative. And how could they reflect the fact that in one of the largest states, France, president Emmanuel Macron is not attached to any party and has no means of getting a candidate in the field?

Who then will nominate Michel Barnier, the well-regarded Brexit negotiator and a member of the centre-right European People’s Party (EPP), which is likely to emerge on top. Perhaps Leo Varadkar. Possible, but unprecedented. Friends also say that the job he is really interested in is that of high representative for foreign policy.

The problem is the Germans have set their heart on the EPP nomination and the commission job, the first time they will have held it since Walter Hallstein in 1967.

EPP leader in parliament Manfred Weber, a Bavarian member of the CSU party allies of Angela Merkel’s CDU, has thrown his hat in the ring with her blessing. German economy minister Peter Altmaier is also interested. Another potential EPP contender is Alex Stubb, the former Finnish premier.

The party is down to eight seats out of 28 in the European Council. According to opinion polling, Politico reports it’s on track to win 185-190 seats out of 705 in the 2019 parliament election. That’s down from 217 today.

The hard reality is that the rise of populism and decline of social democracy mean that only coalitions of several parties can capture a parliamentary plurality. Could the Liberals’ (ALDE) seven heads of government, who represent just 10 per cent of Europe’s population, do that with Margrethe Vestager, the tough Danish commissioner for competition? A woman, to boot!

And the populists could throw a spanner in the works. Although incapable so far of uniting, the parliament’s combined Eurosceptic forces are on track to win about 150 seats – some predict up to 200. One reason that leaders hate the Spitzenkandidat system is precisely the fear of the parliament sending them a populist coalition candidate as the parliamentary frontrunner.

But there’s one possibility being increasingly canvassed – that after an uncertain European election Angela Merkel would – to hell with Spitzenkandidaten! – herself declare her interest directly to fellow leaders. Could she decide that she has led Germany long enough?

The other job she is being touted for is that currently occupied by Donald Tusk, president of the European Council, and one usually reserved for former prime ministers.

Then there’s the banking jobs – the presidency of the European Central Bank (ECB), currently held by Italy’s Mario Draghi, whose eight-year term ends in October 2019; and the important Single Supervisory Mechanism (SSM), the arm of the ECB overseeing the EU’s banking union, and whose chair, Danièle Nouy, needs immediate replacement.

Ireland has two horses in these races. Prof Philip Lane, the Irish Central Bank governor, is mentioned for the Draghi job but seen as far more likely to succeed Peter Praet next year as the bank’s chief economist. But his chances may be stymied by another Irish candidacy: Sharon Donnery, his well-regarded deputy governor in the Central Bank.

One of the strongest in the field is also a woman – gender balance has been repeatedly emphasised – and Germany’s Sabine Lautenschläger, the only female ECB executive board member who has been Nouy’s closest partner and would bring continuity to the role.

Her nomination would make it unlikely that a German could also take the ECB top job and thwart the ambitions of hawkish Bundesbank president Jens Weidmann. He will have taken note of many reports like that from business daily Handelsblatt that “the EU Commission rather than the ECB is the top priority for Merkel”.

Macron is said to have his eye on the job for a French candidate. The odds on two Frenchmen – Benoit Coeuré, an ECB executive board member, and François Villeroy de Galhau, the French central bank head – have shortened.

But there are 17 other euro member states, and many of them may well have something to say about any Franco-German carve-up.