UK Labour leader Jeremy Corbyn has said a 'no-deal Brexit,' would be a national disaster and had pledged that Labour will vote against Theresa May's Chequers plan during his keynote address at the Labour Conference in Liverpool. 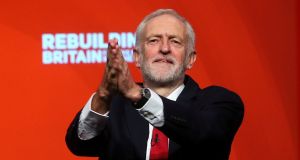 Labour Party leader Jeremy Corbyn after delivering his speech at the party’s conference in Liverpool on Wednesday. He said the Conservatives saw Brexit as an opportunity to impose a free market “shock doctrine” on Britain. Photograph: Hannah McKay/Reuters

Jeremy Corbyn has accused the Conservative government of seeking to use Brexit to transform Britain into a low-regulation, low-wage tax haven that will trample on workers’ rights. Mr Corbyn told Labour’s annual conference in Liverpool that the party respected the 2016 referendum decision but promised to vote against Theresa May’s version of Brexit.

“Labour will vote against the Chequers plan or whatever is left of it and oppose leaving the EU with no deal. And it is inconceivable that we should crash out of Europe with no deal – that would be a national disaster,” he said.

Addressing the prime minister directly, Mr Corbyn said that if she changed direction on Brexit, Labour would support her but that if she could not do so, she should go.

“If you deliver a deal that includes a customs union and no hard border in Ireland, if you protect jobs, people’s rights at work and environmental and consumer standards – then we will support that sensible deal. A deal that would be backed by most of the business world and trade unions too. But if you can’t negotiate that deal then you need to make way for a party that can,” he said.

The Labour leader praised shadow Brexit secretary Keir Starmer, who told delegates this week that, if a general election is impossible, the party will back a second referendum that includes the option to remain in the EU. Mr Corbyn, who will meet the EU’s chief negotiator Michel Barnier in Brussels on Thursday, said he had hoped the Brexit vote would have been followed by “effective and responsible” negotiations that would protect living standards and jobs.

‘No deal or bad deal’

“Instead, the main negotiations have taken place between different factions of the Tory party and the only job this government is fighting for is the prime minister’s. Theresa May used to say that ‘no deal is better than a bad deal’. Yet now, after two years of botched negotiations she is threatening the country with just that choice: a bad deal or no deal. That is a threat to our whole economy, especially our manufacturing industry and to tens of thousands of skilled jobs here in Britain,” he said.

“The Tory Brexiteers unite the politics of the 1950s with the economics of the 19th century, daydreaming about a Britannia that both rules the waves and waives the rules. Labour’s job is now to win support for a deal that meets the needs of the country, combined with our plan to rebuild and transform Britain with investment in our people and economy,” he said.

Promising a “green jobs revolution”, Mr Corbyn said Labour would create more than 400,000 skilled jobs in sustainable energy and other projects to reduce greenhouse gas emissions. He said radical solutions were needed to replace the “failed economic free-for-all” that led to the financial crash a decade ago and to prevent “the politics of blame and division” from filling the gap.

Mr Corbyn said he wanted to draw a line under the controversy over antisemitism in his party, which has led the leaders of Britain’s Jewish community to condemn his leadership.

“I say this to all in the Jewish community: this party, this movement, will always be implacable campaigners against antisemitism and racism in all its forms,” he said.