Public selection process is a novelty, and a risk, for Germany’s oldest party 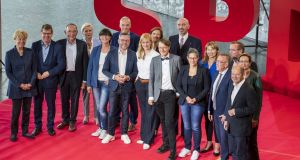 When Germany’s Social Democratic Party (SPD) began its search for a new leader on Wednesday evening, the theme music could have been the languid Louis Armstrong tune: We Have All The Time in the World.

Chancellor Angela Merkel’s centre-left junior coalition partner lost its leader in June – after just a year in the job. Nine weeks on, the SPD has started a public selection process for its new leader with 15 hopefuls appearing at 23 regional conferences in the next six weeks.

After that, 430,000 party members will choose a new leader to take up the reins at a party conference on December 8th.

“People have lost an overview of candidates, and that after first thinking no one would apply,” joked Thorsten Schäfer-Gumbel, the SPD’s interim leader, in Saarbrücken on Wednesday evening.

The lengthy selection process is a novelty – and a risk for Germany’s oldest party, which is facing its worst existential crisis since the Nazi era. This time the threat is not political persecution but public apathy and perceived political irrelevance.

Languishing at 13 per cent in opinion polls, down to 8 per cent in a weekend regional election, all candidates are promising to deliver a greener SPD and a more socially just Germany in a globalised world.

But the biggest question facing the SPD is whether its third grand coalition with Dr Merkel’s centre-right Christian Democratic Union is keeping the party alive or strangling it by degrees.

The most prominent candidate is Berlin’s federal finance minister, Olaf Scholz. The 61-year-old party centrist wants the grand coalition to run to term until 2021 and used his first appearance to challenge SPD leftist claims that he prefers balanced budgets over social spending.

“The social state is democracy’s best invention and we need to defend it in times of globalisation,” he said. “Only a strong state, a strong Europe and a strong SPD can ensure the world doesn’t drift apart.”

But he is coming under pressure from SPD left-wing candidates who say their party’s credibility, and its social justice trademark, is crumbling with each extra day in a Merkel administration.

“We have done this for 14 years, we can no longer demand a better tax system, more just redistribution with taxes for top earners,” said Dr Karl Lauterbach, a leftist health expert. “We are fighting for a just, left-green SPD.”

At their first gathering on Wednesday evening, less prominent candidates urged the party not to disappear down policy rabbit holes over affordable housing, healthcare, childcare and rural broadband.

Instead several suggested the successful candidate will be the one who can answer one simple, existential, question: in 2019, what is the SPD for?

Like most centre-left parties across Europe, the SPD search for policies to win back vanished voters has been a tortuous affair. Two decades ago, the party bounced into office as leader Gerhard Schröder, with a cheeky corner boy personality, elbowed the lumbering Helmut Kohl out of office after 16 years.

In his second term, however, Germany’s sclerotic economy forced Mr Schröder to ram through radical economic and social reforms that, eventually, revived Germany but split his party and ended his career.

At its first gathering on Wednesday, the loudest applause was for promises of a more left-wing SPD prioritising wealth tax, disarmament and social solidarity. “This is not about our personal credibility,” said Prof Gesine Schwan, a leftist candidate, “but about making our party credible again.”