Boris Johnson’s attempt to call election is thwarted by MPs

Nicholas Soames, the 71 year old grandson of Winston Churchill gives an emotional speech about standing down as an MP after 37 years following his sacking from the Conservative Party for voting against the government. 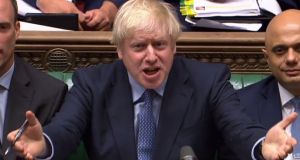 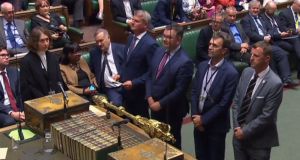 A videograb from footage broadcast by the UK parliament’s Parliamentary Recording Unit (PRU) shows tellers delivering the result of the vote on the motion to hold an early general election, in the House of Commons in London. Photograph: PRU/AFP/Getty Images

British MPs have thwarted a motion to hold an early general election next month, after it was submitted by British prime minister Boris Johnson on Tuesday night.

Members of the House of Commons voted by 298 votes to 56 for the motion, but it did not reach the required support of two-thirds of MPs, falling short by 136 votes.

Mr Johnson will now set out in the House of Commons how he plans to proceed. After the result was announced on Wednesday night the PM accused opposition Labour leader Jeremy Corbyn of wanting to “stop the people from voting.

“ I think he has become the first, to my knowledge, the first leader of the opposition in the democratic history of our country to refuse the invitation to an election.”

The election vote was one of several defeats for Mr Johnson on Wednesday. MPs had already passed a Bill aimed at blocking a no-deal Brexit. They voted for a third reading of the Bill by 327 votes to 299, a majority of 28, on Wednesday evening. The Bill will now go to the House of Lords for the third reading.

The Brexit Bill, tabled by Labour’s Hilary Benn, would require the prime minister to seek a three-month article 50 extension if he has not secured a Brexit deal by October 19th.

After that Bill was passed British prime minister Boris Johnson called for a national election on October 15th, saying he would take the UK out of the EU on October 31st as scheduled if he was still prime minister then.

A snap election would free Mr Johnson of any constraints if he won a majority.

Labour had been expected to abstain in tonight’s vote on an early general election, denying the prime minister the two-thirds majority he needs under the Fixed Term Parliaments Act. Mr Corbyn’s spokesman said Labour wanted a general election as soon as possible but would only trigger it after today’s Brexit Bill has become law.

Earlier on Wednesday, Mr Johnson had used his first prime minister’s questions to challenge Mr Corbyn to vote tonight for a general election next month, framing the contest as a decision about which of them should negotiate Brexit.

Describing as a “surrender Bill” the legislation to block a no-deal Brexit, the prime minister said voters should be allowed to decide how negotiations should proceed.

On Wednesday evening Downing Street had rejected suggestions Boris Johnson will resign to trigger a general election in a bid to block efforts to delay Brexit.

One option now open to Mr Johnson is to table a Bill setting aside the terms of the Fixed Term Parliaments Act to seek an election, a move that would require only a simple majority.

But Mr Corbyn’s spokesman suggested that Labour could table a motion of no confidence in the government as soon as today’s Brexit Bill becomes law.

At a meeting of Labour’s parliamentary party on Wednesday morning, many MPs were reported to have called for the party to resist any general election before the end of October. But Scotland’s first minister Nicola Sturgeon had suggested that the Scottish National Party’s MPs will vote for an election as soon as possible after the Bill attempting to block a no-deal Brexit becomes law.

During debates on the Bill to block a no-deal Brexit on Wednesday afternoon, former Tory chancellor Philip Hammond criticised the “mass purge” of 21 Tory MPs who defied the government in a vote on Tuesday night and subsequently lost the Tory whip.

Mr Hammond said the Bill is not about undermining the prime minister’s negotiating position or handing power to Labour. He said: “I would sooner boil my head than hand power to the leader of the opposition.

“The purpose of this Bill is to instruct this government and this administration how to conduct the UK’s future arrangements with the European Union. ”

Mr Hammond said the prime minister is the one risking a Labour government by insisting on the complete removal of the backstop when negotiating with the EU, something , he said, they cannot comply with. The backstop is a provision in the existing EU-UK withdrawal agreement aimed at avoiding a hard Border in Ireland.

Tánaiste Simon Coveney said on Wednesday the State would back an extension to article 50 if the British prime minister can make a persuasive case for how it can be used to get a Brexit deal.

It also emerged that the EU’s chief Brexit negotiator, Michel Barnier, has cancelled a planned appearance in Northern Ireland due to fears it would not be “appropriate” at the current time.

Mr Barnier had been due to address an event at Queen’s University Belfast on Monday titled “Brexit and the Future of Europe”, in what would have been his first public speech in the UK since the Brexit vote.

Mr Johnson tabled a motion seeking a general election next month after the 21 Conservatives joined opposition MPs to defeat his government in a vote on Tuesday night.

The prime minister said the vote to take over the parliamentary timetable on Wednesday to pass the Bill blocking a no-deal Brexit would hand control of the negotiations to the EU.

Mr Johnson told the House of Commons on Wednesday his strategy is to get a deal with the EU by the European Council summit on October 17th and “to get Brexit done”.

He also labelled Mr Corbyn a “chlorinated chicken” over Brexit before swearing in the Commons.

Also on Wednesday, SNP Westminster leader Ian Blackford claimed Mr Johnson was “behaving like a dictator more than a democrat” as he called on him to “finally act to remove the threat of a catastrophic no-deal Brexit”.

Mr Johnson replied: “I might ask [him] if he will respect the democratic will of the people of the UK, as this House voted to do time and time and time again, and that is implement the result of the [Brexit] referendum.”

Meanwhile, a Scottish court ruled on Wednesday that the matter of whether Mr Johnson’s decision to suspend parliament later this month until shortly before the UK is scheduled to leave the EU is lawful was not one for judges to decide.

More than 70 opposition politicians had challenged Mr Johnson’s right to suspend, or “prorogue”, parliament, arguing it was illegal and unconstitutional because his intent was to force through a no-deal Brexit on October 31st by limiting the opportunity for opponents to object to it.

A few hours before Tuesday night’s ballot, which passed by 328 votes to 301, the British government lost its working majority when former Conservative minister Phillip Lee crossed the floor to join the Liberal Democrats. All 21 Conservatives who voted against the government are barred from standing as candidates for the party in the next general election.