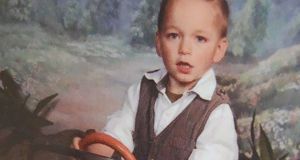 Undated family handout photo issued by the Crown Prosecution Service of Alfie Lamb (3) who was crushed to death with a car seat. Photograph: CPS/PA Wire

The “arrogant” son of an ex-government minister has admitted crushing a three-year-old boy to death with his car seat.

Stephen Waterson (26) squashed Alfie Lamb in the footwell of his Audi convertible while his mother Adrian Hoare looked on.

Following an Old Bailey trial, Hoare (24), from Gravesend in Kent, was found guilty of child cruelty and jailed for two years and nine months.

Waterson, from Croydon, denied Alfie’s manslaughter and had been ordered to face a retrial after a jury failed to reach a verdict.

On Monday, ahead of his fresh trial, Waterson changed his plea and admitted Alfie’s manslaughter by gross negligence.

Both Waterson and Hoare had admitted conspiring to pervert the course of justice by lying to police. Waterson was convicted of intimidating a witness and Hoare of assaulting another witness.

It is the first time anyone in the UK has died from crush asphyxiation as a result of an electronic car seat, police have said.

On February 15th last year, the defendants had gone shopping for cushions in Sutton, accompanied by Alfie, Emilie Williams (19), Marcus Lamb (22), and another young child.

Jurors in the earlier trial were shown CCTV of Alfie running to keep up with his mother moments before he was put in the car for the journey back to Croydon, south London.

The court had heard how nightclub worker Waterson became annoyed at Alfie’s crying and moved his front passenger seat into him as he sat at his mother’s feet. The maximum space in the foot well was 30cm, and, at the touch of a button, that could be reduced to just 9.5cm.

When Alfie continued to moan, Waterson reversed again saying: “I won’t be told what to do by a three-year-old,” Hoare told jurors.

By the time they arrived at Waterson’s home in Croydon, the boy had collapsed and stopped breathing. As medics desperately tried to revive him, Waterson fled the scene and Hoare spun a web of lies to protect her boyfriend, claiming she had been in a taxi.

As police closed in, Waterson gave officers a false name and false statement, and sold the Audi.

He threatened to make Hoare and the other witnesses “disappear” if they did not stick with their fake stories.

Hoare eventually broke her silence and told her half sister Ashleigh Jeffrey what happened in a taped conversation handed to police.

But Waterson blamed Mr Lamb, who he regarded as a step brother, for being a “grass” and put his foot on his head during a violent assault in Crystal Palace Park which was filmed on his mobile phone.

Jurors in the first trial were told Waterson was a controlling womaniser who also had a violent temper with three previous convictions for attacking an ex-girlfriend and his sister’s husband.

Giving evidence earlier this year, he denied he would hurt a child and said he moved his seat back once by up to an inch.

As part of his basis for entering a guilty plea to manslaughter, Waterson maintained he only pushed the seat back one time.

At the conclusion of the case, Mr Harding said Alfie died as the result of a “selfish and cruel act”.

He said: “It’s hard to imagine what sort of pain anyone would go through when you are being crushed in that way. For a three-and-a-half-year-old to be crushed by something so strong and no one helping, it’s a shocking way to die.

“Stephen Waterson has come across as a selfish, abhorrent individual who killed a three-and-a-half-year-old child and has never stood up and said what has happened and taken responsibility for the actions he performed on that day.”

The conviction had finally “given Alfie a voice”, he said, adding: “He was a vulnerable three-and-a-half-year-old who had his life in front of him. He had no-one to care for him on that day. Hopefully Alfie’s voice has now spoken to say justice has been served.”

The court was told social services had been involved with Alfie before his death.

Angela Moriarty, from the Crown Prosecution Service, said: “This was a cruel and heartless act against a defenceless young child.

“Alfie Lamb had been alive and well earlier in the day when he had been out shopping in Sutton. It was in the car journey back home that Waterson, with a callous disregard to Alfie’s safety, deliberately pushed his car seat back.

“Alfie had been subjected to up to 81kg of weight in a 9.5cm gap resulting in catastrophic injuries which proved to be fatal.

“This was a harrowing and difficult case for all those involved, but finally justice has been served for Alfie.” - PA