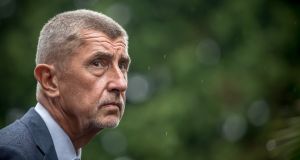 Andrej Babis (65) has resisted strong pressure to resign from opposition parties and protesters who in June staged the biggest rally in Prague since the 1989 Velvet Revolution. Photograph: Martin Divisek/EPA

Czech prosecutors have decided to halt an investigation into alleged fraud by the country’s prime minister, Andrej Babis, potentially closing a case that the tycoon has denounced as politically motivated.

Czech police announced in April that the billionaire and several associates and relatives should face trial over the allegedly fraudulent acquisition of €2 million in European Union funds a decade ago by one of his many companies.

A state prosecutor then took over the investigation into whether Mr Babis and other suspects hid the real ownership structure of the Stork’s Nest farm and conference centre near Prague to make it eligible for an EU small business subsidy.

“The supervising public prosecutor has submitted his final decision in regards to the case referred to in the media as the ‘Storks Nest affair’. In this, he changed his original legal opinion on the matter,” Ales Cimbala, a spokesman for the Prague public prosecutor’s office, said in a statement on Monday.

The Czech capital’s chief public prosecutor would now review the decision and assess whether “this change is legal and justified”, Mr Cimbala added.

Mr Babis (65) has resisted strong pressure to resign from opposition parties and protesters who in June staged the biggest rally in Prague since the 1989 Velvet Revolution that ended communism in Czechoslovakia.

Critics argue that Mr Babis should have stepped down when he came under criminal investigation and say the case threatens to undermine the rule of law in the Czech Republic – fears which intensified when a new justice minister who is seen as sympathetic to Mr Babis was appointed shortly after police said he should face trial.

Mr Babis has always rejected the allegations as politically motivated, however and, with support from a fellow anti-immigration populist, Czech president Milos Zeman, his Ano party has ruled since easily winning elections in 2017.

Polls show that Mr Babis’s legal travails have not dented Ano’s popularity, and he vowed to remain in office even if the prosecution went ahead; he told Reuters by text message that he would not comment on Monday’s news because he did not know the substance of the state attorney’s decision.

“We take note of the prosecutor’s decision. But we warned about this situation. After a string of unexplained changes at the justice ministry and media pressure from the prime minister, much of society will not believe that such a decision would be taken in a case involving an ordinary citizen,” Petr Fiala, head of the opposition Civic Democrats, wrote on Twitter.

“The prime minister has a constant conflict between his political and business interests, which also affects confidence in the rule of law,” he added.

Mr Babis could also face pressure from the European Commission which, according to the preliminary conclusions of an audit that were leaked earlier this year, found that his firms should have been denied EU subsidies in recent years due to conflict of interest.

The billionaire has also failed in attempts to quash a ruling in his native Slovakia that he was an informer for the feared secret police in communist Czechoslovakia.