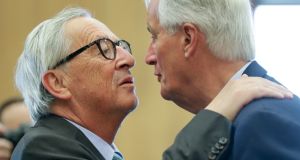 The European Commission has again insisted that the proposed backstop remains “the only solution identified that safeguards the Good Friday Agreement”, as it set out plans for emergency funding for states affected by no-deal Brexit.

The commission again warned that a no-deal Brexit would necessitate checks on all goods crossing the Border in Ireland, though officials would not be drawn on how and where those checks would be carried out, insisting only that discussions with Dublin were “continuing”.

The commission on Wednesday published its sixth no-deal “preparedness” report urging businesses and citizens to complete their preparations for the “increased risk” of the eventuality, and that they “should not rely on the assumption that a third extension will be requested by the UK”.

The report elaborates on previous commitments to provide emergency funding for businesses and member states seriously affected by Brexit.

The EU will draw on unspent funding of €600 million in its solidarity fund for natural disasters and some €180 million from the globalisation fund set up to retrain workers made redundant by factory closures. Officials said they were not suggesting a no-deal Brexit was a “natural disaster”, only that the fund was available.

The UK is specifically excluded from benefiting from such funding although continued support for the Northern Ireland peace funds may see some assistance available to firms north of the Border.

Additional funding will be available through the union’s agricultural and fisheries budgets, while flexible interpretation of the EU state aid rules will allow member states to subsidise businesses in difficulties.

Member states such as Ireland will be able to apply for assistance for SMEs or businesses affected directly by a no-deal Brexit, and for subsidies towards necessary new infrastructure like border/customs posts and staffing.

The commission will legislate to change the eligibility criteria for such funding.

It also acknowledged the latest extension to UK membership to October 31st by proposing extensions to previously agreed temporary rules allowing continued recognition of regulatory grace periods in the wake of a no-deal Brexit for road transporters and airlines to prevent any disruption to travel.

It will also grant continuing access to EU waters for UK fishermen for 2020, as long as it’s reciprocated by the UK.

The report points in particular to the need for industry to make preparations in sensitive areas such as medicines, medical devices and chemicals, and anyone trading with or transporting goods to and from the United Kingdom after the withdrawal is urged to prepare for customs and sanitary and phytosanitary checks and procedures and the logistical challenges that can be expected.

Meanwhile the British prime minister’s chief negotiator David Frost was back in Brussels again on Wednesday for “technical” discussions with the EU task force. Commission sources say that the UK has still made no concrete proposals on replacing the backstop.

But the UK has proposed changes to the political declaration to emphasise its wish not to be tied cloesly in future trade agreements to the EU’s regulatory regime. This is said to be to allow the UK a freer hand in future negotiations with potential international trading partners.

Given the importance of regulatory alignment to any prospect of a backstop, observers say, such a move suggests a growing rather than reducing gap between the EU and UK positions.