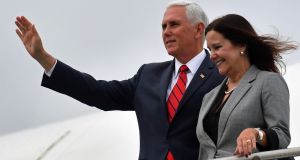 US vice-president Mike Pence and second lady Karen Pence arrive back at Shannon Airport from Dublin during an official visit to Ireland. Photograph: Jacob King/PA Wire

US president Donald Trump has said he never spoke with Mike Pence about staying at his golf resort in Ireland during an official trip to the State by the vice-president this week, contradicting the vice-president’s chief of staff.

“I had no involvement, other than it’s a great place, it’s Doonbeg, I own it, it’s in Ireland, it’s beautiful, it’s wonderful, and he had – his family lives there, which is really amazing,” Mr Trump told reporters on Wednesday.

Mr Pence stayed at the Trump International Golf Club in Doonbeg, Co Clare, on Monday and Tuesday nights, as he met with officials in Dublin – which is about 300km away. Mr Pence left Ireland from Shannon Airport on Wednesday morning after the brief visit.

After criticism that the vice-president had steered taxpayer dollars to Mr Trump’s pockets with his choice of accommodations, his chief of staff Marc Short told reporters travelling with Mr Pence that Mr Trump mentioned staying at his Doonbeg hotel as “a suggestion”.

He told the journalists: “I think that it was a suggestion.

Earlier on Wednesday, Mr Pence’s office walked back Mr Short’s account and said the vice-president had made the decision to stay at the resort.

“I don’t suggest anything,” Mr Trump told reporters at the White House on Wednesday. “I have a lot of hotels all over the place, and people use them because they’re the best, I mean, you know, they’re the best.”

The hotel also hosted the Trump family during a brief trip to Ireland by the president in June.

Early on Wednesday, Mr Pence’s team put out a statement saying that “at no time did the president direct our office to stay at his Doonbeg resort and any reporting to the contrary is false”. It also noted that the Pence family stayed at the property during a visit to Ireland in 2013, before Mr Trump owned it.

Mr Pence’s stay at the hotel drew fire from Democrats on Tuesday.

California Democratic congressman Ted Lieu accused Mr Pence on Twitter of “funnelling taxpayer money” to Mr Trump by staying at the hotel. “You took an oath to the Constitution, not to @realDonaldTrump,” Mr Lieu tweeted.

Mr Pence defended the decision, pointing to his family ties in the area and saying the hotel stay was vetted in advance.

“I understand political attacks by Democrats, but if you have the chance to get to Doonbeg you’ll find that it is a fairly small place,” he told reporters.

The village has a population of just 200 people and would have had trouble accommodating his team if it hadn’t been for the Trump hotel, Mr Pence said.

Mr Pence added that the state department approved the choice.

“I was pleased to have the opportunity to return to that family hometown and be able to stay there . . . It was important to me, before our original trip plan, to at least spend one night in Doonbeg.”

Dozens of locals, some waving American flags, greeted the vice-president and his wife, sister and mother as they made their way through the one-street town after returning from meetings in Dublin.

“My great-grandmother lived in that house,” Mr Pence told several people, pointing to a grey building across the street from Morrissey’s pub, owned by a distant cousin.

The Pences then ducked inside to dine at the pub, where a 22-year-old Mike Pence worked briefly in 1981.

Mr Pence’s stay was paid for by US taxpayers, Mr Short said, but the vice-president personally paid for his sister and mother to come with him.

Mr Trump has retained ownership of his hotels, golf courses and other businesses, but he gave control of the businesses to his sons shortly before he took office in January 2017.

Former government ethics officials and watchdog groups say Mr Trump has failed to put safeguards in place to ensure that he does not directly profit from his actions as president.

Mr Short said the original plan had been for Mr Pence to hold meetings in Dublin and to head to Doonbeg afterwards. A last-minute schedule change meant Mr Pence would need to stay overnight in Ireland before visiting Dublin, and Mr Trump’s property had already been vetted for such a stay.

Mr Trump on Thursday cancelled a visit to Poland in order to monitor Hurricane Dorian, and sent Mr Pence in his stead. He was later criticised for playing golf during that time.

In Dublin, Mr Pence met with President Michael D Higgins and Taoiseach Leo Varadkar, and he urged Ireland and the EU to negotiate “in good faith” with British prime minister Boris Johnson and reach a Brexit deal that respects UK sovereignty. – Bloomberg/Reuters