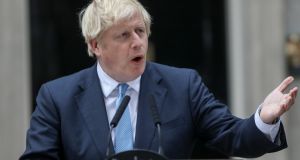 British prime minister Boris Johnson: ‘If there is one thing that can hold us back in these talks it is the sense in Brussels that MPs may find some way to cancel the referendum.’ Photographer: Chris Ratcliffe/Bloomberg

In a statement outside 10 Downing Street, Mr Johnson said he did not want a general election but ruled out seeking a delay to Brexit under any circumstances.

“I want everybody to know – there are no circumstances in which I will ask Brussels to delay. We are leaving on October 31st, no ifs or buts. We will not accept any attempt to go back on our promises or scrub that referendum,” he said.

More than a dozen Conservative MPs are set to join opposition parties in an attempt to take control of the Commons timetable as a first step towards obliging the prime minister to seek an extension to the article 50 deadline. But a senior government source said that if Mr Johnson lost Tuesday’s vote, he would table a motion seeking a general election on October 14th.

Under the Fixed Term Parliament Act, the motion will need the support of two-thirds of MPs but at a rally in Salford on Monday night Jeremy Corbyn suggested that Labour would back it.

Downing Street has threatened to remove the whip from any Conservative MP who opposes the government in Tuesday’s vote and to bar them from standing for the party in a general election. Among those expected to join the rebels are former chancellor of the exchequer Philip Hammond, former justice secretary David Gauke and former international development secretary Rory Stewart.

What is Labour’s position?

Labour’s Hilary Benn on Monday night published a Bill that would oblige the prime minister to seek an article 50 extension until January 31st next year of he has not secured a Brexit deal by October 19th, two days after the start of next month’s European Council. If EU leaders offered an extension to a different date, Mr Johnson would be obliged to accept it unless parliament instructs him otherwise.

In his statement on Downing Street, the prime minister claimed he was making progress in securing a new Brexit deal. But he warned that rebel MPs risked undermining those negotiations.

“If there is one thing that can hold us back in these talks it is the sense in Brussels that MPs may find some way to cancel the referendum. Or that tomorrow MPs will vote – with Jeremy Corbyn – for yet another pointless delay. I don’t think they will. I hope that they won’t. But if they do they will plainly chop the legs out from under the UK position and make any further negotiation absolutely impossible,” he said.