Papal visit began in Mozambique, where he spoke about ‘fraternal reconciliation’ 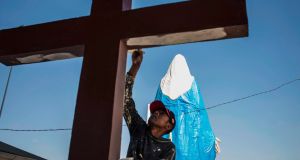 Pope Francis arrived in Mozambique on Wednesday, and will then travel to Madagascar and Mauritius. Photograph: Marco Longari/AFP/Getty Images

Pope Francis has been urged to address human rights issues on a three-nation visit to Africa that began on Wednesday in Mozambique.

The pope is also due to visit Madagascar and Mauritius and is expected to speak during his tour about the importance of peace, as well as addressing poverty, corruption and climate change.

The pope said he was hoping for “fraternal reconciliation in Mozambique and throughout Africa, which is the only hope for a solid and lasting peace”.

Mozambique – where 56 per cent of the population are Christian according to the latest census – has an election coming up in October. This week’s papal visit it the first to the country since John Paul II went there in 1988.

Though the former Portuguese colony’s civil war ended in 1992, it took until last month for President Filipe Nyusi to sign a ceasefire with opposition leader Ossufo Momade.

In the traditionally opposition city of Beira, which was badly affected by March’s devastating Cyclone Idai, citizens were disappointed the pope would not be stopping there.

“Many Christians are disappointed... They thought he was best placed to comfort us,” Fr Alfredo Manhica of Beira cathedral told AFP. “But they’ve realised that his schedule wasn’t just up to him.”

The US-based Pew Research Centre says Africa has the fastest growing Catholic population in the world. Roughly 41 per cent of Madagascar’s 27 million people are Christian, while 32 per cent of the 1.27 million citizens in Mauritius are.

A large group of civil society and human rights organisations signed a letter in advance of the pope’s first stop, calling on him to address human rights concerns in Mozambique. The signatories included Amnesty International, Human Rights Watch, the Committee to Protect Journalists, Reporters Without Borders and Africans Rising.

“We are gravely concerned by the increasing intimidation and harassment of human rights defenders, activists, civil society organisations and media… the lack of accountability, justice and effective remedies for victims of human rights violations and abuses as well as violations of the rights of refugees and asylum seekers,” the letter said.

“The pomp surrounding Pope Francis’s visit presents an opportunity to shine a spotlight on human rights violations in Madagascar and Mozambique,” said Muleya Mwananyanda, Amnesty International’s deputy director for southern Africa. “In his meetings with Malagasy and Mozambican authorities, Pope Francis must address the human rights violations unfolding in the two countries and remind leaders that the world is watching.”

Ms Mwananyanda said the pope’s words could be “a powerful tool for change”.

“Issues like Madagascar’s use of mass, prolonged pre-trial detention in inhumane conditions and Mozambique’s harassment of journalists must be squarely on the table this week,” she said.

This will be the pope’s second trip to sub-Saharan Africa. In 2015, he went to the Central African Republic, Kenya and Uganda. At the time, civil society organisations called for him to address LGBT rights in the region.