Demonstrators clash with police at economic forum in Cape Town 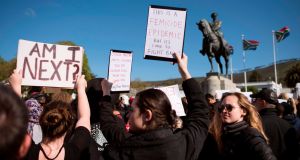 People take part in a protest against the abuse of women by men outside parliament in Cape Town. Photograph: Rodger Bosch/AFP/Getty

The spate of urban unrest sweeping through South African cities over the past week spread to Cape Town on Wednesday, where regional leaders and international investors are attending the World Economic Forum on Africa.

Hundreds of protesters gathered at the Cape Town International Convention Centre, where the forum is taking place, to demonstrate against recent violent attacks on foreigners and women in the country.

When demonstrators tried to enter the centre to confront South Africa’s president, Cyril Ramaphosa, on his government’s plan to tackle xenophobia and femicide, police dispersed them with water cannons and stun grenades.

For the rest of the day protesters spread throughout downtown Cape Town, blocking highways and clashing with police, in a bid to have their grievances heard.

Since last week rioters and looters have caused havoc in business districts across Pretoria and Johannesburg in Gauteng province, attacking foreign-owned shops, assaulting their owners, and setting buildings and vehicles alight.

Migrants are often seen as competition for scarce jobs and government services in South Africa.

By Wednesday evening, seven deaths and more than 289 arrests related to the violence had been reported by the authorities. Five of the victims were shot dead and two were found burned to death in Alexandra township, where violence occurred on Tuesday night, according to the police.

At the same time, a number of grisly murders of women by South African men have come to the public’s attention recently, and this has sparked criticism of the government’s sluggish efforts to tackle gender-based violence.

In one of the cases, 19-year-old student Uyinene Mrwetyana was raped and then bludgeoned to death with a weighing scale by a post office employee last week after she went to pick up a parcel at the Cape Town collection centre, where he worked.

More than 200,000 South Africans have signed a petition calling on parliament to declare gender-based violence a state of emergency in the country.

According to the World Health Organisation, in 2016 South Africa had the fourth-highest female interpersonal violence death rate in the world.

At a breakfast briefing in the Western Cape’s provincial capital ahead of attending the economic forum, Mr Ramaphosa repeated his recent condemnation of the violence. “South Africa must be a country where everyone feels safe, including women and foreign nationals,” he said.

While there were fewer reports of xenophobic violence on Wednesday compared with previous days, the earlier incidents included the looting of South African-owned shops in Nigeria.

Other African governments have been critical of how South Africa has handled the attacks against their citizens, claiming not enough is being done to protect them.

The outbreaks of violence in South Africa are reminiscent of similar deadly attacks against migrants that occurred in the country in 2008 and 2015.