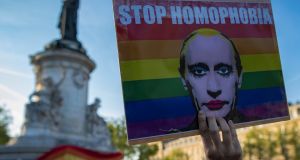 Rights groups are working to evacuate the victims of a brutal crackdown on suspected homosexuals in the Russian republic of Chechnya that has sent shockwaves across the international LGBT community.

Novaya Gazeta, an independent daily known for its investigative work, released a series of reports last month alleging that at least 100 people had been abducted by law enforcers in Chechnya and held in secret jails.

Detainees were subjected to daily beatings and tortured with electric shocks to force them to reveal information about other gays in the republic. At least three people are believed to have been killed.

Human Rights Watch has corroborated the reports using its own interviews with victims.

Ramzan Kadyrov, the strongman president of Chechnya, has dismissed the charges as “provocations”.

Religious and social leaders in Chechnya have called for the perpetuators of the allegations to be punished for “insulting the faith and dignity” of Chechen men.

Chechen law enforcers have freed some LGBT prisoners after extracting huge bribes, a spokeswoman for the Russia LGBT Network said

Even by the standards of Chechnya, a region traumatised by two violent separatist wars since the fall of the Soviet Union, the reports of mass attacks on LGBT people have been shocking.

But while the allegations have sparked protests in western cities from New York to London, Berlin and Dublin, the public response in Russia has been muted.

Chechen law enforcers have freed some LGBT prisoners after extracting huge bribes, a spokeswoman for the Russia LGBT Network said this week.

Speaking on condition of anonymity, she described a humiliating release procedure, where police forced LGBT people to renounce their homosexuality and promise to cut ties with other gays.

Families of detainees were also drawn into the process and ordered “to disown their [gay] relatives or take responsibility for their future behaviour”.

The Russia LGBT Network has received 80 calls since opening a hotline to provide emergency support to those in immediate danger following the Novaya Gazeta reports.

A small proportion of the callers were relatives of LGBT people in Chechnya afraid of violent reprisals from officials or private individuals.

Mr Kadyrov, who has ruthlessly crushed his opponents since being appointed by Vladimir Putin to lead Chechnya in 2007, has played to rampant homophobia in the republic by allowing law enforcers to torment LGBT people.

Aside from the danger of persecution by the authorities, LGBT people are at risk of falling victim to “honour killings” by relatives for bringing shame on their families and friends.

At least 30 individuals have escaped from Chechnya and are living in safe houses in Russia, but want to leave the country, according to Rainbow Railroad, a non-profit group that helps LGBTs seek haven from state-enabled or tolerated persecution.

“With the support of the Russian LGBT Network on the ground we’ve navigated a road to safety for two people, and are preparing more individuals right now,” Kimahli Powell, the director of Rainbow Railroad wrote on Facebook. “It’s a small start.”

Western leaders have urged Mr Putin to ensure the safety of LGBT people and bring the perpetuators of homophobic violence to justice.

The Russian president has ordered an investigation of the Novaya Gazeta allegations, but LGBT rights groups say there is a risk the inquiry will go nowhere unless the West keeps up pressure on the Kremlin to act.

Mr Putin agreed on Friday to instruct Russian law enforcement agencies to co-operate with human rights workers gathering information about LGBT rights abuses in Chechnya and on the protection of minorities.

Tatyana Moskalkova, Russian commissioner for human rights, told Mr Putin that stronger protection was needed to help Chechens of “non-traditional sexual orientation” overcome their reluctance to reveal their names during investigations, she said.

Presidential approval was required for a working group to support Chechen victims of homophobic abuse in Russia, but outside Chechnya.