On trade, Canada and Ireland need all the friends they can get

America Letter: No surprise that trade dominated talks between Kenny and Trudeau 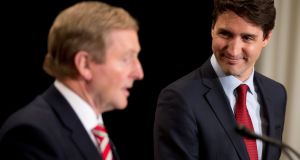 Enda Kenny’s decision to visit Canada this week in possibly one of his final foreign trips as Taoiseach throws up interesting historical parallels. It was during a trip to Canada in 1948 that then taoiseach John A Costello announced that Ireland was becoming a republic and leaving the Commonwealth.

Rumour has it that Costello was incensed when Canada’s governor general placed symbols of Northern Ireland on the table at an official dinner, prompting the taoiseach to declare that Ireland was withdrawing from the Commonwealth, much to the alarm of his Fine Gael colleagues at home.

Kenny may have beaten his predecessor’s record as Fine Gael’s longest-serving taoiseach last month, but he did not follow in Costello’s footsteps by making any grand announcements during his visit to Canada this week, presumably to the frustration of his would-be successors at home.

But Kenny did use the occasion to reflect on the ties between Canada and Ireland, links that are often overshadowed by the powerful Irish-American connection.

As the Taoiseach recounted in a speech attended by business leaders and Canadian prime minister Justin Trudeau in Montreal this week, Ireland’s links with Canada stretch back to the 17th century when emigrants arrived as part of the European settlement of the continent. By the 19th century, Irish emigrants were helping to build burgeoning cities like Trudeau’s hometown of Montreal, where almost 40 per cent of the population at one point claimed Irish roots.

Today, Canada’s annual allocation of visas to thousands of young Irish people has ensured a continued wave of Irish people settling in Canada to work and live each year.

Although once bound by their membership of the British Commonwealth, Ireland’s history and emergence as a republic ensured that both countries followed very different trajectories.

Today, the legacy of that former joint membership of the Commonwealth of Nations, though downplayed by successive Irish governments in a bid to cement a narrative of an independent republic, is still evident in the close alignment between Canada and Ireland in various multinational organisations such as the IMF and the United Nations (though the two countries are likely to compete for a seat on the security council in 2021).

At the IMF, Ireland sits alongside Canada and about a dozen Commonwealth Caribbean countries, a legacy of Ireland’s status as a British colony.

Despite the disparity in size, Ireland shares other characteristics with Canada. Both are closely intertwined culturally and economically with a bigger and more powerful neighbour.

And just as Brexit presents economic and political challenges to Ireland, the new US administration is presenting enormous challenges to Canada.

Chief among these is economics. United States and Canada trade about US$500 billion worth of goods and services annually. But as is the case with most of America’s main trading partners, Canada runs a trade surplus in goods with the United States, exporting more than it imports.

Three-quarters of Canada’s exports last year went to the United States. That has caught the eye of US president Donald Trump, who has ordered a review of countries with which the US has a trade deficit (including Ireland), though the White House has already acknowledged that oil accounts for much of Canada’s exports to the US, a commodity that it needs.

Other Trump proposals are causing alarm across the border. Last week, the US threatened to pull out of Nafta (the North American Free Trade Agreement), which has governed trade relations between the US, Canada and Mexico since 1994 – prompting a hurried phone call to the White House by Trudeau.

Washington is clamping down on Canadian trade practices in other ways. Last week the US slapped a 24 per cent tariff on Canadian lumber exports and threatened action against the dairy sector. These announcements have helped drive the Canadian dollar down against the greenback.

On Thursday, as the Taoiseach was meeting his Canadian counterpart in Montreal, the Bank of Canada governor said that Canada needed to look beyond its nearest neighbour for trade opportunities given the turn towards protectionism under Trump.

Just as Irish exporters are being urged to expand their trading horizons beyond Britain, as Ireland’s biggest trading partner prepares to leave the single market, so too Canada is eyeing export markets further afield.

So it is not surprising that trade dominated discussions between the Taoiseach and Trudeau this week. Both governments believe in the liberal economic model of free trade that the US president has vowed to challenge; both are strong supporters of CETA, the EU-Canada trade deal that was endorsed by the EU despite protests.

These are uncertain economic times for Ireland and Canada. It is important that they have all the friends they can get.