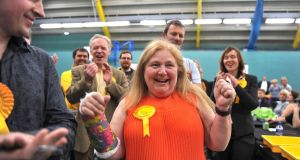 By the time Britain woke up on Friday morning, only a fraction of its local election results had been counted but the outcome for each of the political parties was already clear. It was a triumphant election for the Conservatives, pointing to a landslide victory for Theresa May in next month’s general election.

Labour took a battering, despite some high-profile victories in English mayoral contests and smaller than expected losses in Wales. The Liberal Democrats saw their share of the vote recover to about 18 per cent, but failed to make the breakthrough they hoped for in terms of seats.

For Ukip, it was an unqualified disaster, which could herald the end of the anti-EU party, which now has no MPs and a handful of councillors and will have no MEPs after Brexit.

Defence secretary Michael Fallon, the Conservatives’ most accomplished media performer, toured the broadcast studios early on Friday morning. But instead of taking a lap of honour, he played down the party’s success, warning that there was no guarantee that the local election results would translate into Westminster seats next month.

Fallon’s faux gloom reflects the Conservatives’ biggest fear ahead of the general election – that their victory will be such a foregone conclusion that supporters will not bother to vote. In fact, the local election results may be even more auspicious for the party than the raw vote share suggests and May’s gamble on a snap election looks set to pay off handsomely.

London did not vote in this set of local elections, so the results tell us little about how voters in the constituencies most heavily opposed to Brexit will behave in the general election. However, the Liberal Democrats’s disappointing performance in some other parts of England will cheer Conservatives and alarm Labour.

The collapse of Ukip, combined with a weaker than expected performance by the Liberal Democrats, will make many Labour seats highly vulnerable to Conservative challengers. And Labour’s loss of Glasgow is not only a major psychological blow to the party, but a sign that its recovery in Scotland has a long way to go.

If Labour can find any comfort, it is in Wales, where the party retained control of Cardiff and other cities and lost seats to Independents rather than the Conservatives. But on the basis of these results, a Labour victory next month looks more improbable than ever, while May is poised to sweep back to power with a massive majority.