How France slowly, but surely, came round to the idea of a Macron presidency

Emmanuel Macron of the centrist En Marche! movement and Marine Le Pen of the far-right National Front party face each other in a run-off for the French presidency. The new president will be announced at 8pm French time (7pm Irish time) on May 7th. 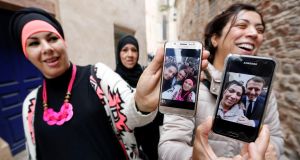 Donald Trump’s election may seem a strange place to begin to recount the French presidential campaign, but it was the moment when, in the words of Marine Le Pen, “what was said to be impossible has become possible”.

On the morning of November 9th, 2016, France woke up to the realisation that the leader of the extreme right-wing Front National (FN) could be elected president of France.

Le Pen was the first French politician to congratulate Trump, before final results were in. She saw the Brexit vote in the UK and the election of an anti-immigrant populist in the US as harbingers to her own accession to power.

The campaign took place in the context of those two events. It ended with Le Pen offering the spectacle of a Trump-like performance in her television debate with the centrist Emmanuel Macron, who is likely to become president of France on Sunday evening. If so, French commentators are sure to say their compatriots are more intelligent than les anglo-saxons.

After Britain and the US, France showed itself to be polarised between an urban, educated elite personified by Macron, and an angry, disadvantaged peri-urban and rural population who saw Le Pen as their standard bearer.

Over the past 15 years, with the term shortened from seven to five years, and the advent of party primaries, French presidential campaigns have come to resemble those in the US.

The French seem to do everything in the longest, most complicated way possible, including their elections. By June 18th, the election cycle will have lasted nine months and comprised eight national polls: two rounds each for the LR and socialist primaries, two rounds for the presidential election and two rounds to elect the National Assembly. No wonder voters are weary.

The process has been rich in surprise breakthroughs and shattered ambitions. The former president Nicolas Sarkozy was eliminated on November 20th, followed one week later by Alain Juppé, who had for two years been tipped to become France’s next president.

President Francois Hollande announced on December 1st that he would not seek re-election. That freed his prime minister, Manuel Valls, to pursue his own doomed presidential ambition.

Voters seemed to treat the campaign as a tasting menu, elevating one candidate after another to favoured position. Hamon and his proposal for a universal basic income were flavour of the month in January.

Fillon and Le Pen looked set to face each other, until a clap of thunder, the revelation in the satirical weekly Canard Enchaîné on January 25th that Fillon had salaried his wife and children at taxpayers’ expense. The scandal burgeoned, dominating media and public attention into March.

The bons mots from the endless television debates will remain in the annals of election history: Mélenchon criticising journalists’ “shyness of gazelles” in broaching Fillon and Le Pen’s corruption; the Trotskyist candidate Philippe Poutou’s plaintive observation that, while Le Pen claimed parliamentary immunity, he and his fellow Ford factory workers enjoyed no “workers’ immunity” if summoned by police.

The losers have been breathtakingly bitter. Fillon called the scandals that he brought upon himself a “lynching” of “unprecedented violence”. After enlivening the campaign with his humour, Mélenchon went down ignominiously, berating the “mediacrats and oligarchs” he blamed for his defeat before disappearing from public view.

All candidates claimed to be the best rampart against Marine Le Pen. When it finally sank in that she was almost certain to lose, Le Pen tore into Macron ferociously in the May 3rd debate. But by then, Macron was beyond reach, commanding some 60 per cent of the vote, according to polls.

The common wisdom said no candidate without the backing of a party machine had a chance. Macron was called a hot-air balloon and, by Mélenchon, a “hallucinogenic mushroom”. He was, above all, a very lucky young man. The planets seemed to align for him.

It was a gradual process. I first noticed increasing numbers of people around me saying they would vote for Macron back in December. In February, a friend’s daughter joined his campaign as a volunteer fundraiser. In March, a contact in the foreign ministry resigned to join Macron’s campaign too. At a dinner party, I met a business executive who applied over the internet to represent En Marche!, Macron’s fledgling movement, in the June legislative elections. Endorsements by French and European politicians and celebrities snowballed.

Macron still faces intense hostility from the anti-European, anti-liberal far left and far right. Sixty per cent of those who will vote for him say they will do so faute de mieux. Yet despite being ill-loved, he has gained in self-assurance and clarity, particularly in the campaign’s last stages.

The country slowly came round to the idea of a Macron presidency. The anti-European ardour that Marine Le Pen banked on has diminished. The percentage of French who want to leave the euro continues to fall. In the latest Eurobarometer, 53 per cent of French respondents said Europe is useful, compared to 48 per cent a year ago. Only 14 per cent said Europe was “a bad thing”, compared to 17 per cent last year.

The campaign has not been all scandal and vituperation. It has wiped out France’s ingrained tolerance for corruption in public office, and is likely to usher in France’s youngest president. Most of all, it has posed the crucial questions with new acuity. Does France want to play an active role in Europe and the world, or pull up the drawbridges and fill the moats with burning oil? Will France dare to deregulate its sclerotic economy, or continue to wallow in lethargy, debt and unemployment? We’ll know for sure on Sunday evening.