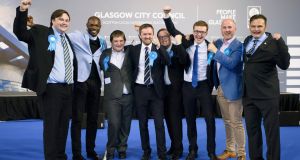 The Conservatives have made sweeping gains in local elections, as Labour lost hundreds of seats, the Liberal Democrats’ recovery stalled and Ukip was all but wiped out. Theresa May’s party advanced throughout the country, with spectacular gains in Scotland and in traditional Labour heartlands in England.

The party was on course on Friday night to make bigger gains in local elections than any governing party for more than four decades. But the prime minister sought to play down the significance of the results as a pointer to the outcome of next month’s general election, warning Conservatives against complacency.

“I don’t take anything for granted, and if you just look at what’s happened in the last couple of years, we saw that the opinion polls got it wrong in the 2015 election, they got it wrong for the referendum and of course Jeremy Corbyn has himself pointed out that he was a 200-to-one chance for the Labour leadership. That is why I’m not taking anything for granted,” she said.

Labour suffered heavy losses in England and Scotland, losing control of Glasgow city council, where the Scottish National Party (SNP) emerged as the biggest party. Labour performed better in Wales, retaining control in Cardiff and other cities and losing seats to Independents rather than the Conservatives.

The party won contests for newly created mayors in Manchester and Liverpool but lost out to Conservative Andy Street, the former head of department store chain John Lewis, in the West Midlands.

“We’ve had some difficult results overnight. Some have been very good. We’ve gained seats in some places, we’ve held councils that many predicted we wouldn’t. And others, unfortunately, have not been elected,” Mr Corbyn said on Friday night.

Labour’s defeated mayoral candidate in the West Midlands, Sion Simon, said Labour supporters were dissatisfied with the party, even in places they had won.   “We did hear coming back from the doorsteps a message from traditional Labour voters that, in a campaign overshadowed by national issues, they are not feeling confident the party is strong in the Labour values. We in the Labour party have to hear that message coming up from our people and we need to respond and we need to respond to it now,” he said.

The Liberal Democrats, who were hoping to win voters from other parties with their clear, anti-Brexit message, failed to make inroads in the face of the Conservative tide. The party looked set on Friday night emerge with fewer council seats than before the election.

The SNP made some gains, mostly at Labour’s expense, but also lost control of two councils in Scotland. First minister Nicola Sturgeon said results south of the border showed that the Conservatives were on course to win next month’s general election.

The biggest losers were Ukip, which lost almost all of its seats as its voters moved en masse towards the Conservatives. Arron Banks, until recently the party’s biggest donor, compared Ukip to a racing car, accusing leader Paul Nuttall of crashing it at the first bend.

“Nigel [Farage] was a skilled driver who drove the car around the track faster and faster, knowing when to take risks, delighting the audience. The current leadership has crashed the car, at the first bend of the race, into the crowd, killing the driver and spectators,” he said.