Political turmoil as Italy’s death toll from Covid-19 climbs to more than 80,000 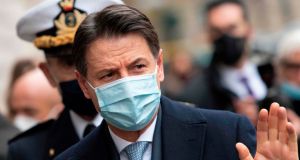 Italy’s prime minister Giuseppe Conte needs to win the support of a majority of Italian senators ahead of a confidence vote in the upper house on Tuesday. Photograph: Alberto Pizzoli/AFP/Getty Images

Italian prime minister Giuseppe Conte will face a crunch parliamentary vote on his future next week as he scrambles to find enough lawmakers to prop up his government after a junior partner quit his coalition.

Mr Conte needs to win the support of a majority of Italian senators ahead of a confidence vote in the upper house on Tuesday after former prime minister Matteo Renzi’s small Italia Viva party resigned from the government, criticising its coronavirus response.

The political turmoil comes as Italy’s death toll from Covid-19 climbed to more than 80,000 – the second-highest in Europe after the UK – and the government battles a brutal economic recession.

The ruling coalition still commands a majority in the lower house, where Mr Conte will speak on Monday, but he needs to win over a sufficient number of senators from small parties to replace the 18 lost when Mr Renzi’s party withdrew its support.

If Mr Conte loses the Tuesday vote, he will be forced to offer his resignation to the country’s president, Sergio Mattarella.

Mr Renzi quit the coalition on Wednesday after complaining for weeks that Mr Conte’s government was bungling the spending plans for almost €200 billion of EU recovery money to support the pandemic-hit economy.

While Italia Viva is tiny, the former prime minister controls enough senators to put Mr Conte’s future in doubt unless he can cobble together support from independent lawmakers and possibly woo others from Silvio Berlusconi’s Forza Italia right-wing opposition party.

The coalition at present commands 147 seats in the Italian senate out of 321, meaning he must find at least 14 new allies to support him on Tuesday to survive.

Multiple Italian media reports on Friday suggested Mr Conte’s frantic race to find enough lawmakers to save his premiership was making progress, and that government insiders were confident he would survive.

The leader of the two largest parties in the coalition, the Five Star Movement and the Democratic party (PD), have both thrown their support behind Mr Conte and attacked Mr Renzi for causing political uncertainty at a time when Italy faces a grave health and economic crisis.

Mr Conte, a former law professor, was first appointed as prime minister in 2018 as a political unknown to lead a coalition of the Five Star Movement and Matteo Salvini’s League party. After that government collapsed with the departure of Mr Salvini in 2019, Mr Conte stayed on as the leader of a new coalition forged between the once bitter rivals – Five Star and the centre-left PD.

If Mr Conte is unable to win the confidence vote, the Italian president would be expected to permit the parties in parliament to form a new government without him. This could either be a broadly similar coalition to the current one, led by a figure from the PD or Five Star, or a broader coalition of national unity led by a technocrat prime minister and taking in parts of the right-wing opposition.

Five Star and the PD are both anxious to stave off the risk of early elections being called by Mr Mattarella in the event that no other coalition can be formed. National opinion polls show in that scenario the Italian right, made up of Mr Salvini’s League, Giorgia Meloni’s Brothers of Italy and Mr Berlusconi’s Forza Italia would command more than half of the vote.

Under Italian law, because Mr Mattarella’s term as president expires in February 2022, no elections can be held for six months before that date. Than means if an election is to be held, it must take place before August this year.