Spanish ex-king’s lover due to testify in defamation trial 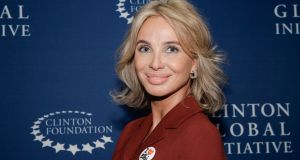 Corinna Sayn-Wittgenstein: has claimed that after the relationship with Juan Carlos ended, she suffered a campaign of harassment by Spanish security services. Photograph: JP Yim/Getty Images

The former lover of Spain’s retired king Juan Carlos I is due to testify on Friday in a defamation trial stemming from claims of death threats and deep-state subterfuge.

José Manuel Villarejo, a former police officer, is accused of slandering Félix Sanz Roldán, who was head of the Spanish intelligence service (CNI). Mr Villarejo could face a jail sentence of up to two years if found guilty of slander for claiming that the intelligence chief had issued death threats against the German-born businesswoman Corinna zu Sayn-Wittgenstein, who has disclosed she had a romantic relationship with the former monarch.

Ms Sayn-Wittgenstein (56), whose maiden name is Larsen, is due to testify as a witness via video-link from London.

She has claimed that after the relationship with Juan Carlos ended, she suffered a campaign of harassment by Spanish security services. In a written affidavit, registered in London in 2019, she said she did not wish to travel to Spain to testify “in part because I believe that my personal safety cannot be guaranteed given the past and present conduct of General Roldán”.

Juan Carlos (83), who abdicated in 2014, gave Ms Sayn-Wittgenstein €65 million which he had received from the Saudi royal family in 2012. However, she has said he later asked for the money back.

She has cited a mysterious break-in at her property in Shropshire, in the UK, as one instance of the campaign against her, as well as claiming she was followed by Spanish intelligence personnel in Brazil and suffered having her apartment and office in Monaco occupied by agents on the pretext that they were making security arrangements.

“It’s not the same having some angry lunatic threaten to kill you as having the boss of the whole [intelligence] service do that to you,” he said.

Mr Sanz Roldán denies the accusation and his legal action has led to this one-day trial.

Ms Sayn-Wittgenstein is expected to confirm her own claims of being harassed by Mr Sanz Roldán and the CNI. However, a spokesperson for her said she was not testifying in order to support the defendant, but merely “to state the facts”.

Mr Villarejo has been in preventive custody since 2017 and later this year he is due to go on trial for a range of alleged crimes including criminal organisation and extortion. Investigators believe he used his position as a senior police officer to run a criminal network for decades. Many recordings that he made, allegedly to spy on and extort targets, have already been published in the Spanish media and have had enormous repercussions in political, financial and royal circles.

In one recording, Ms Sayn-Wittgenstein appeared to tell Mr Villarejo that Juan Carlos had hidden money abroad and had sought a commission for his role in brokering a contract to build a fast-train network in Saudi Arabia. Spanish investigators are currently looking into both claims, prompting Juan Carlos to flee the country in August to the United Arab Emirates, where he remains.