Donald Trump’s last days as President have been marked by rage and turmoil. No one in his orbit could convince him to acknowledge election defeat and use his remaining time to hold events to tout accomplishments that he and his aides are proud of. 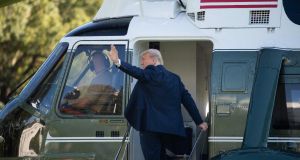 US president Donald Trump will leave Washington on Wednesday morning, hours before the inauguration of his Democratic successor Joe Biden. File photograph: Saul Loeb/AFP via Getty

US president Donald Trump will depart the White House for Mar-a-Lago, Florida next Wednesday morning, as he becomes the first president in modern times not to attend the inauguration of his successor.

Mr Trump will make his final journey from the White House on Air Force One, before the noon inauguration of Joe Biden as the 46th president of the United States at the Capitol in Washington.

Mr Trump was also said to be requesting a military-style send-off at Joint Base Andrews outside DC where the presidential plane is based.

Mr Trump, who this week became the first president in history to be impeached twice, is expected to base himself at his Palm Beach resort when he vacates the White House. He moved his legal residency to Florida from New York in 2019.

His daughter Ivanka and her husband Jared Kushner, who worked with the president during his four-year term, also recently purchased property in the Miami area, prompting speculation that the couple and their family are planning a permanent move to the state.

The Washington Post reported that the couple prevented their secret service detail from using any of the half-dozen bathrooms in their Washington home during their tenure in the capital, forcing the government to rent a nearby $3,000 (€2,460) a month studio apartment to allow security to access a toilet.

Moving trucks were present in the White House grounds on Friday as the Trumps prepare to leave Washington after four years. The city’s streets were again under heavy security as preparations continue for next week’s inauguration.

It follows the January 6th riot which saw thousands of Trump supporters breach the US Capitol.

More than 20,000 national guard troops are expected in the capital in the coming days, with concrete barriers and fencing erected in the downtown area. A rehearsal for the inauguration planned for Sunday has been delayed until Monday amid security concerns.

New court filings lodged in connection with the detention of the rioters state that some of the detained had planned to “capture and assassinate elected officials” during the siege.

Government departments, including the departments of justice and defence, announced on Friday they will open internal investigations into their preparedness and response to the attack. It follows reports that dozens of people on the FBI’s terrorist watch list were in Washington on the day of the riots that left five people dead. Officials across the country have been warned of the threat from right-wing actors in the coming days, amid evidence that some are planning attacks in state capitals as well as in Washington DC.

“Last week, we suffered a devastating attack on the Capitol that threatened the lives of and traumatised members of Congress, staff and support workers,” she said at a press conference. “To protect our democracy, we must now subject the security of the US Capitol complex to rigorous scrutiny.”

Ms Pelosi refused to be drawn on when she will send the article of impeachment against Mr Trump to the Senate, a process that will trigger Mr Trump’s trial.

“We’re working on taking this to trial,” she said, when asked about the timing of the next stage in the process.

Alaska senator Lisa Murkowski became the latest Republican to signal that she is open to convicting Mr Trump. At least five senators have indicated they could convict the president, though Senate majority leader Mitch McConnell, who holds significant sway over the party, has not confirmed which way he will vote.

A two-thirds majority is needed to convict, meaning that 17 Republicans would have to join Democrats in the vote. Should the Senate vote to convict Mr Trump on the impeachment charge, they can then hold a vote barring him from holding office again.