Who has what it takes to become the next German chancellor? 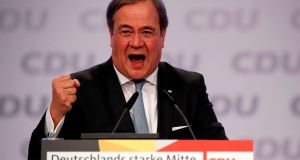 None of the three men running to lead Germany’s ruling Christian Democratic Union (CDU) on Saturday have what it takes to be chancellor, according to a public television survey.

After two false starts, 1,001 delegates will on Saturday choose a new leader after the successor to chancellor Angela Merkel quit just over a year into the job.

Following a largely virtual campaign – and a digital party conference with online voting – none of the leadership hopefuls has caught the imagination of the wider public.

On Friday Germany’s ZDF public television asked which of the candidates ordinary people think has what it takes to be the next chancellor after September’s federal election. Both frontrunners finished neck-and-neck, but on just 28 per cent support.

That is likely to increase the competition between the two men, Friedrich Merz, a conservative-liberal lawyer, and Armin Laschet, minister president of the western state of North Rhine-Westphalia.

Among CDU voters polled, 37 per cent liked the idea of a Chancellor Merz, an outsider candidate and rival of Dr Merkel, while just 24 per cent were for Mr Laschet, who is seen as a continuity candidate. One in five voters had no opinion.

“The party’s business and rural wings are for Merz, while Laschet has more of the urban vote,” said a senior party official. “The new leader is not chosen by party members but delegates, party officials at various levels, from federal down to local level, and they are more wary of Merz than the wider party membership.”

Most observers expect a first round of voting to end inconclusively and eliminate a third candidate, CDU foreign policy spokesman Norbert Röttgen, with his transfers crucial for crowning a new leader.

But Saturday’s vote will leave unanswered the most crucial question for Germany’s European neighbours: who will head the CDU’s race for the chancellery when Dr Merkel departs after four terms?

Normally the CDU leader has first refusal on the position, but concerns over Mr Laschet’s personal popularity has prompted party officials to insist ahead that the chancellor candidate race remains open until at least Easter.

Dr Merkel’s health minister Jens Spahn, struggling to conceal his ambition for the chancellery, hopes his decisive action in the Covid-19 pandemic will stand him in good stead. The ZDF poll suggests average voters are less impressed with his performance, however, with just one-third convinced he has what it takes to be the next German leader.

The only centre-right candidate with majority support, 54 per cent, is not even in the CDU but its Bavarian sister party, the Christian Social Union (CSU).

Its leader, Markus Söder, is hoping to be only the third Bavarian to run for the chancellery – and the first to succeed.