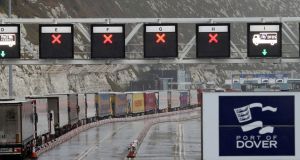 Freight lorries queueing at the check-in area for the Port of Dover in Kent, where Channel traffic has begin to build up following a quiet start to the year. Photograph: Gareth Fuller/PA Wire

Irish companies hoping that difficulties in trade with Britain could be eased by tweaks to the rules from Brussels may be in for a disappointment.

This week the Irish Freight Transport Association wrote to Taoiseach Micheál Martin to warn of disruption to supply chains, emptying supermarket shelves and jobs at risk unless the rules are at least temporarily relaxed.

But the view of officials is that companies must adjust their supply chains to reflect the new reality, and insist the private sector has long been urged to do so and offered support.

It’s expected that the effect of Britain’s departure will increasingly be apparent in the coming weeks as levels of trade ramp up following a seasonal slump.

There is a profound lack of appetite in the European Union for the deal to be reopened or tweaked, particularly only a fortnight into its implementation as the pandemic continues to rage.

The attitude from the EU is: Britain has received what it asked for.

The trade friction now being seen, which all but rules out Britain’s future as a distribution hub for the Irish market, is the consequence of its policy position of leaving the single market and customs union, set down years ago by Theresa May as prime minister.

Britain was offered a way to avoid onerous checks on animal and food products if it aligned with the EU. London declined, explaining that the point of Brexit was to diverge.

In other words, what is happening is a result of Britain’s choices. This includes the strict rules of origin that are impeding EU goods destined for Ireland if they come via a British distribution hub.

The point was made by the EU’s chief negotiator, Michel Barnier, this week amid domestic uproar in Britain that touring musicians and entertainers would need visas to perform in EU member states, a bureaucratic headache that makes it difficult to go on tour.

The British press reported that the government had turned down an EU offer to exempt performers from the requirements, drawing the ire of Radiohead’s Thom Yorke.

Speaking to journalists, Barnier appeared to confirm the report.

“A lot of the consequences of Brexit, which are numerous and serious, have been underestimated and often badly explained,” Barnier said.

“We had proposed rather ambitious measures in regards to mobility for journalists, artists, musicians and others,” he said. “[But] we must be two to conclude an agreement.”

There may be more cold showers to come. UK professional qualifications will no longer be recognised in the EU, something only possible now through case-by-case negotiations with member states – a big blow to some of the UK’s mighty service industries, such as in law or architecture, that many may not have woken up to yet.

In the words of a Dutch customs official as he seized sandwiches from a British driver at the Hook of Holland ferry terminal this week: “Welcome to the Brexit, sir.”