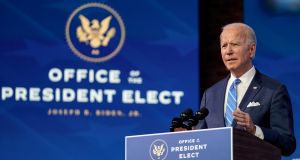 US president-elect Joe Biden has unveiled a $1.9 trillion (€1.57tn) coronavirus relief proposal, aimed at urgently combating the pandemic and the economic crisis it has triggered. As the US faces its deadliest stage of the pandemic, Mr Biden described the moment as “a crisis of deep human suffering”.

The ambitious, wide-ranging plan includes $160 billion (€132bn) to bolster vaccination and testing efforts, and other health programs and $350billion (€288bn) for state and local governments, as well as $1tn (€824bn) in relief to families, via direct payments and unemployment insurance.

Details of the aid package had been released by Mr Biden’s transition team earlier on Thursday.

“During this pandemic, millions of Americans, through no fault of their own, have lost the dignity and respect that comes with a job and a paycheck,” Mr Biden said on Thursday, speaking from Wilmington, Delaware. “There is real pain overwhelming the real economy.”

Mr Biden ran on the promise that he would deliver Americans through the coronavirus crisis, and more recently has pledged to ramp up vaccination efforts, and oversee the administering of 100 million Covid-19 jabs during his first 100 days.

In advance of the president-elect’s inauguration next week, a deeply divided US is also facing an unmitigated public health crisis. More than 385,000 people have died of Covid-19. Meanwhile, weekly unemployment claims have jumped to 965,000. Before the pandemic, the figure was typically about 225,000.

With Democrats having gained an edge over Republicans in the Senate, the Democratic leader Chuck Schumer has said Mr Biden’s Covid-19 relief package will be his top priority, even as the legislative body contends with the impeachment trial of Donald Trump.

In passing the proposal, Mr Biden has an ally in Bernie Sanders, the Vermont senator and former presidential contender, who will soon be at the helm of the powerful Senate budget committee. As chair of the committee, Mr Sanders will have control of budget reconciliation, a process that allows Congress to expedite some legislation.

The “rescue plan will begin to provide our people with much-needed support”, Mr Sanders said.

Mr Biden has also called on politicians to extend a national eviction moratorium, which expires on January 31st.

Housing advocates have been pressing Biden to extend and bolster a federal ban on evictions in recent weeks and months, and they have asked him to additionally include funds for rental assistance in relief proposals. His current plan includes $30 billion (€25bn) in rental and utility assistance for those struggling to pay bills. Advocates are also asking Congress to cancel any rent or mortgage debt incurred during the pandemic.

The president-elect said that while “these plans won’t come cheaply”, a failure to act “will cost us dearly”. – Guardian