A lasting trauma: Wuhan at the heart of the battle over roots of coronavirus 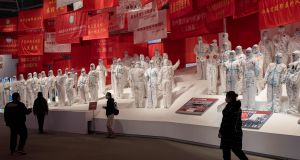 People visit an exhibition about Chinas fight against the Covid-19 coronavirus at a convention centre in Wuhan that was previously a makeshift hospital for coronavirus patients. Photograph: Nicolas Asfouri/AFP via Getty Images 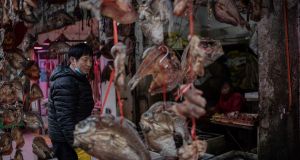 A vendor selling dried fish works at his stall at a market in Wuhan on January 15th. Photograph: Nicolas Asfouri/AFP via Getty Images 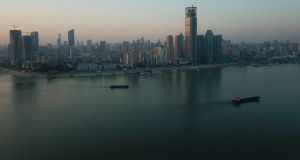 Boxes of imported steaks arriving at the Baishazhou wholesale market in Wuhan go through an elaborate ritual before being placed in the freezers that line one of the city’s largest wholesale markets.

Behind a high red fence, men in hazmat suits test the packages for coronavirus, spray them with clouds of disinfectant and add a QR code to track goods before they can be carried away on a forklift.

But a stall owner selling Argentine beef rejects a theory proposed by Beijing that imported frozen food may have seeded the city’s coronavirus outbreak last year, marking the start of the pandemic. Instead, he points to a different hypothesis, occasionally propagated by some Chinese officials that has not been backed by credible evidence.

“It definitively was the military games that brought the virus in,” he said, referring to a sporting event held in Wuhan in October 2019.

The frozen foods – and the fringe theories believed by some of the market’s stallholders – are at the centre of a fight to define the narrative of the pandemic’s origins and handling of its fallout.

Many of the inconsistencies that prevent the Communist Party from broadcasting a wholly triumphant tale are found in Wuhan. The city offers clues to the roots of the virus, as well as revealing lasting trauma, sadness and resentment from those who challenge the carefully sanitised narrative propagated by Xi Jinping, China’s most powerful leader in decades.

A World Health Organisation team landed on Thursday, six months after launching an investigation into how the virus jumped from animals to humans. The virologists, whose arrival was postponed by a week after Chinese authorities delayed approving visas, will have to consider the frozen goods theory.

They will also be pressed to rule out the possibility that the virus leaked from the Wuhan Institute of Virology, a hypothesis particularly popular among China hawks in the US and pushed at times by Mike Pompeo, the US secretary of state, and President Donald Trump.

Most Wuhan residents who spoke to the Financial Times voiced a deep ambivalence about remaining at the centre of a politically charged debate over how the pandemic started. Some support theories for which little evidence has been publicly disclosed. Others believe that wildlife sold at the Huanan seafood wholesale market, the location of the city’s first superspreader event that is now closed and surrounded by a metal barrier, was the source.

But many were less concerned with how the pandemic started and instead focused on dealing with its legacy.

“At the time, there were all sorts of rumours, with people saying it was poison or came from the lab,” said a young professional surnamed Tang. “I can’t really believe that a government would have developed the disease and let it loose.”

Even so, anger remains high among those who believe the Communist Party should do more to admit early mistakes and properly account for failing to intervene faster.

Ai Xiaoming, a documentary film-maker and writer, said publicly raising questions about the origins of coronavirus would probably elicit a harsh reaction from authorities, given the sensitivity of the issue. She believes the priority should be recording and preserving evidence of how mismanagement led to unnecessary deaths.

“The government cannot say: ‘The job we did was oh so great, that everyone is happy and that we met the needs of everyone’,” she said.

Ai is gathering stories from those in Wuhan whose plight has been airbrushed out of official narratives. “Citizens don’t get to decide for themselves whether they talk about what happened. It’s something that officialdom decides,” she said.

Beijing prefers to emphasise how it had largely smothered the contagion by spring and has since imposed Wuhan-style lockdowns for even small outbreaks. For example, authorities have reimposed restrictions on more than 20 million people after the discovery of a few hundred cases in the north of the country this month.

China’s success has not gone unnoticed in Wuhan, where the rapidity of the recovery – the city of 11 million was hosting raves in water parks by August and crowded New Year’s Eve fireworks parties – compared favourably with the floundering responses in many other countries.

China’s official narrative is on full display at a slick installation on the party’s response set up in an exhibition hall that was previously used as a temporary quarantine ward.

Young professionals bused in by their employers are greeted by an exhibit that begins and ends with Xi, leaving little doubt who was responsible for Wuhan’s success.

The accomplishment is broken down into a step-by-step model of epidemic control. Party leadership is cast as essential for the mass lockdowns and the rapid construction of temporary hospital wards.

For some visitors, this official narrative is a fair portrayal of what they experienced. “It set off a lot of deep feelings when I went,” said Meimei, an employee of a state-owned enterprise.

Meimei talks with pride of the work she did to help local communities during the lockdown to order and deliver groceries. She also took part in the construction of hospitals built from scratch in just weeks.

“Now that everywhere in the world has infections and many places can’t control them, I feel that the response at that time wasn’t bad. There was definitely a shift in my psychology,” she said

Meimei used to regularly speak to friends about the pandemic’s origins but “it really feels like no one talks about this any more because everyone knows the topic escalates and becomes political”. She added: “You try your best to look forward, do what you’ve got to do, go to work, study, try to minimise the virus’s impact on everyone.”

Moving on is not so easy for the bereaved families, who remain aggrieved with official failures. Zhong Hanneng has been seeking restitution after her 39-year-old son died of Covid-19. But the Wuhan courts have repeatedly refused to register her lawsuits requesting additional compensation and an acknowledgment of responsibility.

The justice ministry did not immediately respond to a request for comment.

Peng Yi, a primary school teacher and Zhong’s only child, was told to go into mass quarantine after contracting the virus. Instead of receiving care, he was sent to different hospitals, she said, providing videos and messages from her son’s phone to detail the confused situation.

“We thought getting to the hospital was saving him but it was sending him to a road with no return,” she said.

Zhong’s sense of grievance stems in part from the Chinese government’s efforts to control the narrative.

“Most ordinary people in Wuhan don’t understand how this epidemic arrived here all of a sudden,” she said. “The government keeps singing its own praises and grinning as if they have won a great victory. It really isn’t like that at all.” – Copyright The Financial Times Limited 2021