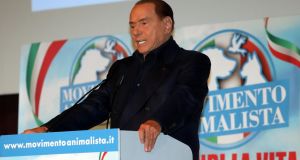 The tide of populist and Eurosceptical politics that has swept Europe over the last couple of years does not appear to be ebbing.

The electoral success of Austria’s Freedom Party, now in government, and the return this week of outgoing Czech president Milos Zeman suggest that the false dawn last year of Emmanuel Macron’s election in France can be seen as only the briefest hiatus in that wave reshaping Europe’s civic space.

And now in Brussels we are waiting with bated breath, but little expectation, on the election in Italy at the beginning of March to stem that tide.

It has all the hallmarks, however, of what has come before across the continent: polls show that the populist right in the shape of the maverick 5Star Movement of Beppe Grillo may well eclipse the centre-right, while the left, in the form of former prime minister Matteo Renzi’s Democratic Party (PD), seems destined to sink to near oblivion like much of Europe’s centrist social democracy.

The centre-left, weakened by several splits, is polling below 30 per cent – while the PD held almost 300 seats in the outgoing lower house, polls predict it will win between 130-170 this time around. It seems voters in Italy are reluctant to reward the relative economic and political competence manifested by the country’s current PD administration.

The far-right nationalists of the Lega Nord (LN) and Brothers of Italy (BoI), then, may well end up in government. Meanwhile the irrepressible Donald Trump of Italian politics – the original model, Silvio Berlusconi – seems set to return to power at the age of 81 at the head of his centre-right Forza Italia.

Although barred by law for corruption from office for the time being, Berlusconi is clearly running the party’s show and, if it takes the prime ministership, he will, like Poland’s Jaroslaw Kaczynski, steer the ship of state from the back seat until his legal purdah ends next year. He may bridle, though, at putting the Lega Nord’s Matteo Salvini into power.

The election result, however, is deeply unpredictable with parliamentary gridlock likely. Changes to the electoral system mean that no one party is likely to win a majority, and the largest alliance, that between Forza Italia and the Lega Nord, is likely not to exceed 40 per cent of the vote.

Coalition – unstable at that – will be the only way to rule, with a wide combination of possibilities on the cards and a further election quite possible a few months down the road.

Most worrying to international investors – and those who want to see Italy, the euro zone’s third-largest economy, helping the Macron project of an EU relaunch – is the possibility of a Eurosceptical coalition of the 5Star movement with the Lega Nord and the Brothers of Italy.

The 5Star’s prime ministerial candidate, 31-year-old Luigi Di Maio, has made clear that the party is shaking off its aversion to coalition politics or assuming power. It has seen its position in the polls consolidate in the mid-20s, a combination of a young anti-establishment vote and strong opposition to immigration – Italy has taken in 624,000 migrants arriving by boat from North Africa in the past four years.

The party’s abysmal record in running Rome, however, the only place it has governed, has damaged its reputation. Both the 5Star Movement and the Lega Nord have also moved away from supporting the idea of a referendum on euro membership – membership of the EU is not an issue for them – and in government are likely to be more like an Austrian drag on reform than the out-and-out obstructionists of Poland and Hungary.

According to the latest Eurobarometer, only 37 per cent of Italians have a positive view of the EU and 80 per cent disapprove of its handling of migration. Both a centre-right Forza Italia-Lega Nord-BoI or a centre-left-centre-right-PD-Forza Italia government would be likely to pursue policies broadly akin to that of current PD prime minister, Paolo Gentiloni, moderately Eurosceptical and critical of the EU’s failure to manage the migration crisis.

Persisting unemployment also means a strong reluctance to adhere to what are seen as austerity politics and notably the fiscal constraints of the European Stability and Growth Pact.

“Hopes that Italy could be the third engine of a Franco-German partnership to renew the EU are probably mistaken,” writes Luigi Scazzieri of the Centre for European Reform. “No matter what happens on March 4th, tensions between the new government and the EU are assured.”

Wolfgang Munchau of the Financial Times argues: “From a European perspective, the difference between a 5Star/Lega government and a more traditional administration of the centre right or the centre left will be one of degree.”

Continuity is likely then to be the order of the day – but an Italian-style continuity of instability.