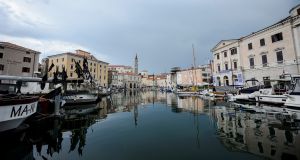 The marina in the Slovenian town of Piran: there was a bitter 26-year-old territorial dispute involving principally 7.3sq m of maritime territory in the bay. Photograph: Jure Makovec/AFP/Getty Images

It was never going to be that simple. The idea was that when new states signed up to join the European Union, they would do so with an unequivocal promise to recognise the territorial integrity of every other member state and to acknowledge the legitimacy and inviolability of existing borders.

If that meant swallowing some national pride as a price for joining, so be it. Aspirations, such as that around the eventual unification of Ireland, were all very well, but there was a clear understanding that henceforth borders within the union would only be moved by mutual consent.

Borders were not to be a matter of dispute inside the union. Eventually, as the union integrated economically and politically, they would all but disappear or, in the Brexit parlance, become “frictionless” – a problem only when the union lost a member. The EU had no intention of importing the legacy of Europe’s 19th- and 20th-century wars.

But it was never going to be that simple. Inevitably, states brought with them historical baggage. In cases such as Greece and Cyprus, that was unresolved conflicts with neighbours which, with Turkey, became – courtesy of the national veto – the principal obstacle to their accession to the union.

That was also the case with Croatian accession, held hostage for years by member state Slovenia over a bitter 26-year-old territorial dispute involving principally 7.3 square miles of maritime territory in Piran bay in the northern Adriatic Sea. Also disputed is a 416-mile stretch of land along the Slovene-Croatian border that forms the southern frontier of Europe’s Schengen area.

The deadlock appeared to have been broken when the EU persuaded both states to submit themselves to binding arbitration. Croatia was then duly admitted to the EU in 2013, but two years later, with the gate barely closed behind it, it abandoned the arbitration process and refused to accept the court’s ruling last June.

While the court awarded some land claims to Croatia, it has given the bulk of the bay to Slovenia and, most importantly, a 10-mile sea corridor through Croatia’s share to give the Slovenes direct, unfettered access to the rest of the Med.

The Permanent Court of Arbitration in The Hague gave both states six months to implement its ruling, a deadline which ran out, with the ruling unimplemented, last week.

“We intend to implement the ruling and expect Croatia to do the same,” Slovenian prime minister Miro Cerar said at a news conference following talks in Zagreb with his Croatian counterpart, Andrej Plenkovic.

Plenkovic warned against “unilateral acts that could cause incidents on the borders”. Croatia has proposed new talks but the Slovenes are adamant they will not talk, and that the court ruling must stand.

Which leaves the EU in precisely the mess its founding fathers were determined to avoid. At a time when the union would like to demonstrate its “peace-engineering” credentials.

This is a particular short-term priority of the EU in the Balkans, where the legacy of the collapse of former Yugoslavia has left a scarred and still unstable landscape.

Bosnia Herzegovina, Macedonia, Montenegro, Serbia and Kosovo all share aspirations to EU membership. The prospect of accession, and the disciplines that process will supposedly impose, remain the best carrot the union can dangle. Above all it remains determined not to import unresolved conflicts into its midst.

Yet, which of these states, all involved in bitter territorial or sovereignty disputes, will take seriously an EU injunction that they must definitively resolve their territorial disputes before they can be considered for membership?

Croatia, it would seem, has circumvented any such requirement, and it maintains a long-standing dispute with Serbia over where its territory ends and Serbia’s begins along a 201-mile stretch of land near the Danube. Croatia can single-handedly block Serbia’s accession, a lesson it learned well from Slovenia’s attitude to its own accession.

The Croats would like to see a breakaway Croatian territory in Bosnia Herzegovina. Serbia refuses to recognise Kosovo, while Greece will refuse to allow Macedonia into either the EU or Nato because it believes its name reflects ambitions to take over Greek territory.

Quite apart from the dangers of instability, and even a return to war on its southeastern flank, the region is of huge strategic significance to the EU. Whether it is in managing future flows of migrants from the south, or providing a political and economic bulwark against the growing influence both Russia and Turkey.

But if the EU cannot resolve what many have seen as just a minor tiff in Piran bay, what prospect now for its ambitious Balkan project?